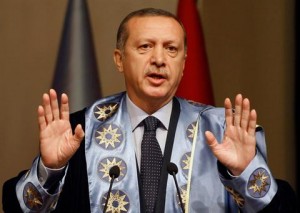 State news agency SANA said Erdogan was being stripped of the PhD because of “his plots against the Syrian people” and his use of “arbitrary” violence against protesters in Turkey.

SANA quoted Khudur Orfaly, dean of Aleppo University, as describing the decision as “a message of solidarity to the friendly Turkish people, who reject Erdogan’s hostile policies”.

Relations between Syria and Turkey have deteriorated sharply since the uprising broke out against President Bashar al-Assad’s rule in March 2011 and Erdogan became one of Assad’s most outspoken critics.

Turkey is now home to more than 400,000 Syria refugees and harbors many of the opposition’s top civilian and military leaders.

At home, Erdogan has faced a wave of protests since June demanding his resignation.

Human rights groups have accused Turkish police of using excessive force against the demonstrators, and Syrian state television has frequently aired footage of Turkish security forces putting down the protests.

Syria’s state media does not acknowledge the existence of any popular anti-Assad movement, instead blaming the violence on foreign-backed “terrorists”.

Erdogan’s honorary doctorate from Aleppo is not the only PHD he has . In May 2012 Erdogan was conferred an honorary degree of Doctor of Philosophy in International Relations from the Quaid-e-Azam University, of Islamabad , Pakistan.

The PhD degree was reportedly “conferred to the Turkish Prime Minister to honour his efforts in promoting understanding between civilizations, interfaith harmony, tolerance, freedom, democracy and human rights as reflected in Turkey’s dynamic foreign policy under his leadership.”