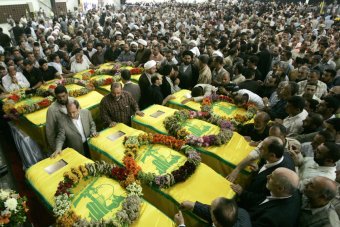 When Ali Farhat was summoned to the immigration department in the United Arab Emirates, the 33-year-old Lebanese restaurant worker knew he would have to pack up his family and leave fast.

Like many Shiite Muslims working in the oil-rich Gulf state, Farhat says he popped up on the country’s deportation radar merely because of his sect, which its Sunni rulers associate with the Lebanese Shiite militant group Hezbollah.

“I felt like a criminal, but I did not know what I did wrong,” said Farhat, who had lived in the UAE for 15 years before his expulsion in May. “It seems that my only crime was that I am Shiite.”

Long considered by authorities as a security threat, hundreds of Shiites have been quietly expelled from the UAE, Saudi Arabia and other Gulf Arab states on suspicion of being supporters of Hezbollah. The deportations have surged in recent months after the group publicly joined the civil war in Syria on the side of President Bashar Assad, an archenemy of the Gulf’s rulers.

It is the latest fallout for Lebanese Shiites from Hezbollah’s high stakes and highly divisive military involvement in the war in Syria, and a sign of the growing sectarian fissures in the Arab world over Syria.

Last month, Saudi Arabia announced plans to deport Lebanese who authorities accuse of supporting the Iranian-backed Hezbollah, and the other Gulf states say they too are reconsidering the status of their Shiite guest workers.

A Lebanese diplomat stationed in the Gulf confirmed to The Associated Press on Thursday that the stepped-up deportations from Saudi Arabia have begun, adding that he has documented an average of three cases a week in the past three weeks.

Farhat, like hundreds of other deportees, was never given an official reason for his family’s expulsion, and was not able to challenge it in court or at a government agency.

Deportees like Farhat are not the only ones bearing the brunt of Hezbollah’s military involvement in Syria, where the group’s fighters helped Assad’s forces recapture the strategic town of Qusair, near the border with Lebanon, last month.

The group’s backing of the Syrian regime has angered the overwhelmingly Sunni rebels fighting to topple Assad and raised sectarian tensions inside Lebanon. Several Syria-based Islamist groups have threatened to attack Hezbollah strongholds in Lebanon in retaliation.

Rockets from the Syrian side regularly crash into Shiite towns and villages near the border with Syria. Twice this month, rockets slammed into the Hezbollah stronghold known as Dahyeh, south of the Lebanese capital, Beirut.

In the most ominous sign yet that the sectarian war in Syria has begun to consume Lebanon, a car bomb tore through a heavily guarded sector of the area Tuesday, wounding 53 people.

The Syrian conflict, now in its third year with over 93,000 people killed, has pitted overwhelmingly Sunni rebels against Assad’s regime, which is dominated by Alawites, an offshoot sect of Shiite Islam.

It has also become a regional struggle for influence between Shiite Iran on one side and major Sunni power Saudi Arabia on the other, backed by smaller Gulf Arab states.

“People start living in fear because they always think that they will be next,” he told The Associated Press.

He recounted his ordeal on the phone, speaking from a village in Lebanon’s eastern Bekaa Valley, where he returned with his wife and their young daughter. The family has been forced to move in with his parents.

Farhat’s boss and his boss’ family were ordered out of the UAE at the same time, he said, adding they were given just a week to pack up. After they were served the deportation order, they were put in a police van and taken to the immigration department. Their residency permits were canceled on the spot, their passports seized by officials. They got the documents back at the airport on their way out of the country.

The expulsion drive is partly fueled by the growing hatred between Sunnis and Shiites. Analysts say it is also rooted in Gulf rulers’ need to keep their populations in constant fear of enemies — domestic and foreign — in order to preserve their authoritarian rule.

Shiites in the Gulf have “effectively become scapegoats” for the Sunni rulers trying to curb Iran’s growing regional influence and Hezbollah’s military reach, said Christopher Davidson, an expert on Gulf affairs at Britain’s Durham University. Tehran is Hezbollah’s main backer and supplies the group with money and weapons, channeled into Lebanon through Syria.

In Syria, the Gulf countries have supplied the rebels fighting to oust Assad with funds and weapons.

Shortly after the fall of Qusair, the Gulf Cooperation Council — which includes Saudi Arabia, Kuwait, Bahrain, Qatar, Oman and the UAE — said the bloc would crack down on Hezbollah members as part of a joint effort to limit the group’s “financial and business transactions.”

Hezbollah says the group has no business interests in the Gulf. However, there are more than half a million Lebanese working in the Gulf states, including tens of thousands in Saudi Arabia. Many are Shiites.

Ali Rashid, a 45-year-old Lebanese businessman, had lived for 33 years in the UAE’s capital, Abu Dhabi, where he owned four restaurants and a gift shop worth $3.5 million. In December 2011, he was told by authorities that he had 10 days to leave with his wife and three daughters. He bought one-way tickets to Beirut with $10,000 in cash he managed to take out of his bank account.

Rashid’s ties to the country go beyond his business investment: His father served in the security force that protected the family of Sheik Zayed Al Nahyan before he united seven city-states in the early 1970s, including Abu Dhabi and Dubai, into a federation that is now ruled by Sheik Zayed’s sons.

“I loved that country more than the Emiratis do,” Rashid said, proudly showing off a black-and-white photograph of his father in a tribal robe, holding a rifle and a sword. His eyes filled with tears when he looked at a picture of himself, dressed in a white dishdasha and headscarf, traditional attire of Gulf men.

“I asked them for a reason, did I drive through a red light?” Rashid said. “They said, ‘No, it’s an order from the top.'”

Privately, Rashid said, the immigration officials told him that his only problem was that he is Shiite, but when he asked them to put it in writing, they refused.

There was something Rashid said he was told by the UAE authorities that he could have done in order stay: Inform on fellow Lebanese Shiites living in the country on their Hezbollah links and the group’s alleged sleeper cells. He refused.

So did Hassan Alayan back in 2009, when he was deported along with his wife and four children from the UAE, where he had lived for 27 years working as a journalist.

Alayan now runs a committee to represent the deportees in Beirut.

He has registered the names of 400 Shiite families who have been expelled from the UAE in the past four years, but says the number is much higher because many won’t speak about their ordeals for fear of jeopardizing the immigration status of relatives still in the Gulf.

He estimated that about 100 people have been deported from Gulf countries in the past weeks, but said there were no accurate figures. Many families refused to talk to the media and several declined to be interviewed by the AP.

“It’s a very simple mentality they have in the Gulf, and that is that all Shiites support Hezbollah with money,” Alayan said.

While Alayan, Rashid and Farhat all denied ever supporting Hezbollah, the end of their prosperous lives in the UAE has made them prouder Shiites, Rashid said.

“Their behavior gave us more power to be Shiite,” he said.