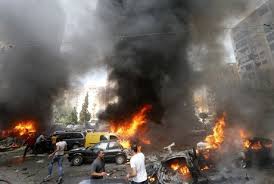 A little known Syrian rebel group called a Liwa’a 313 Brigade, a faction of the Free Syrian Army (FSA), has claimed responsibility for a bomb attack which rocked Tuesday the Bir al-Abed area of Beirut’s Dahiyeh suburb, a stronghold of the Hezbollah militant group.

Dozens were wounded when a car bomb exploded in a parking lot at a commercial and residential neighborhood of Bir al-Abed . The power of the explosion shattered windows and damaged several buildings in the area.

In a statement in Arabic on Facebook Tuesday, the group lashed out at the Lebanese state, which it said actively assists Hezbollah. It claimed the bombing was a response to Hezbollah participation in the Syrian regime’s ongoing offensive against the city of Homs – a strategically important position and a hub of rebel activity.

“We warned again and again against [Hezbollah’s] intervention in Syria,” the Liwa’a brigade added.

The rebel group also claimed it was behind an attack on a Hezbollah convoy in eastern Lebanon on June 28.

However the mainstream Free Syrian Army condemned the attack in Beirut’s mainly-Shiite southern suburb, describing it as a “terrorist” act.

Meanwhile , condemnation of the blast by Lebanese and Arab leaders continued, describing the situation in Lebanon as dangerous and calling for unity among all the Lebanese

Lebanese parliament Speaker Nabih Berri described the bombing as part of a “series of criminal” incidents, stressing the need to form a Cabinet .

“ There is a need to speed up the Cabinet formation process at this critical and dangerous time,” Berri was quoted as saying during his weekly meeting, adding that he was facilitating the process to form a government as soon as possible.

“The terrorist bombing that targeted the southern suburb is more than just a message and requires that everyone take a responsible stance to face this criminal series [of events] targeting the nation,” he said.

Maronite Bishop Boulos Matar, head of the Maronite Beirut Bishops also condemned the attack, describing it as an attempt to target Lebanese unity.

“The Lebanese have gone through a lot and so long as we are united no one can harm, irrespective of the conspiracy [being plotted],” Matar told reporters in Qana, south Lebanon.

“There is someone working to undo the unity of Lebanese and God willing they will not succeed,” he added, describing the situation as “very critical.”

Aley MP Talal Arslan, the head of the Lebanese Democratic Party, a close ally of Hezbollah said the attack should embolden the Lebanese to face the sectarian strife gripping parts of the country.

“The suburbs bombing will strengthen our immunity and determination to face [those] harming the security of the nation and its citizens, and our ability to face all kinds of strife threatening various Lebanese regions,” Arslan said in a statement.

He also urged politicians to tone down their political rhetoric to avoid inciting sectarian strife.

“This terrorist act aims to destabilize the country and incite strife between the sons of one nation,” Arabi said in a statement.

He also voiced support to “the Baabda Declaration which aims to fortify Lebanon against the dangerous repercussions of the Syrian crisis.”

Meanwhile Lebanese President Michel Suleiman urged the Lebanese to refrain from interfering in the Syrian crisis.

“It is important to stop interfering in the Syrian crisis, since Lebanon has no interest in doing so,” Suleiman was quoted as saying by National News Agency on Wednesday.

“Lebanon should not be sacrificed on the altar of democracy for the sake of others.” He added