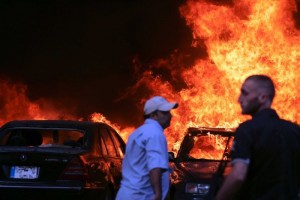 A car bomb rocked a stronghold of the Shiite militant Hezbollah group south of the Lebanese capital Tuesday, setting several cars on fire and wounding 37 people in a major security breach of a tightly-guarded area, security officials said.

The powerful blast in a bustling commercial and residential neighborhood came as many Lebanese Shiites began observing the holy month of Ramadan, and is the worst explosion to hit the area in years — likely direct fallout of the civil war raging in neighboring Syria.

A group of about 100 outraged Hezbollah supporters marched in the area after the blast, carrying pictures of Hezbollah chief Sheik Hassan Nasrallah and shouting in support of their leader and sectarian slogans.

Hezbollah operatives fired in the air to disperse people who attacked the interior minister with stones after he inspected the scene of the blast, trapping him for 45 minutes in a building before he was escorted through a backdoor.

“The Shiite blood is boiling,” the Hezbollah supporters shouted.

Minister Marwan Charbel is seen by some Shiites as sympathetic to hardline Sunni cleric Ahmad al-Assir, who was agitating against Hezbollah for months and is now on the run.

With skirmishes between Shiites and Sunnis on the rise around the country, religiously mixed and dangerously fragile Lebanon is increasingly buffeted by powerful forces that are dividing the Arab world along sectarian lines. Some Syrian rebel groups, which are predominantly Sunni, have threatened to strike in Lebanon after Hezbollah joined Syrian President Bashar Assad’s troops in their battle against opposition fighters.

“This is a message, but we will not bow,” said Ziad Waked, a municipal official speaking to Hezbollah’s Al-Manar television.

Tuesday’s explosion struck the area of Bir el-Abed, and was most likely caused by a car bomb, officials said on condition of anonymity in line with regulations. They said the blast was in the parking near the Islamic Coop, a supermarket usually packed with shoppers, and a petrol station.

“The explosion was so strong I thought it was an Israeli air raid,” witness Mohammad al-Zein said. “My wife was sleeping in bed and all the glass fell on her, injuring her in the mouth, arms and legs.”

Another resident said that he was fasting on the first day of Ramadan and was on his way to shop for the evening meal that would break his daylong fast.

“I was riding my motorcycle on my way to a sweets shop and then there was this massive explosion that knocked me off and I fell on the ground,” said a 52-year-old employee of a private company. He declined to be named out of security concerns.

Red Cross head of operations George Kattaneh said 37 people were wounded, saying they were all light injuries, many of them from breaking glass.

The area is a few hundred meters (yards) away from what was known as Hezbollah’s “security square” where many of the party’s officials live and have offices. Nasrallah received dignitaries there before the 2006 war. The so-called security square was bombed out by Israel in that conflict and Nasrallah has gone underground since then, only rarely appearing in public and never for more than few minutes, fearing Israeli assassination.

Tuesday’s explosion is one of the biggest in the area since the end of the country’s 15-year civil war, which ended in 1990.

“It is a large area heavily populated. No force in the world can protect every area and every street,” Hezbollah lawmaker Ali Moqdad said.

Television footage from the scene revived memories of that conflict, when car bombs set by sectarian groups were common. There have been numerous car bombs targeting politicians and journalists since then, but random car bombs have been rare.

Hezbollah operatives in civilian clothes, some of them carrying Kalashnikov rifles, cordoned off the site of the explosion with yellow ribbons. They and Lebanese security officials barred journalists from approaching the site itself.

Ambulances and fire engines, their sirens wailing, raced to the area and witnesses said casualties were rushed to the nearby Bahman and Rasoul al-Atham hospitals. Immediately after the blast, people could be seen running in the street away from the site of the explosion which set several cars on fire.

The power of the explosion shattered windows and damaged several buildings in the busy residential and commercial area. A security official said the bomb was placed in a car and that it weighed 35 kilograms.

In May, two rockets slammed into a Hezbollah stronghold in south Beirut, wounding four people. The rockets struck hours after Nasrallah vowed in a speech to help propel Assad to victory in Syria’s civil war.

In June, a rocket slammed into the same area, causing no casualties.

Lebanon’s Sunni Muslims mostly back the overwhelmingly Sunni rebels in Syria, while many Shiites support Assad, who is a member of Syria’s minority Alawite sect, an offshoot of Shiite Islam.

“It is not a surprise for Dahyeh, the stronghold of resistance, to be targeted by such lowly, treacherous attacks that bear the fingerprints of the Israeli enemy and its tools,” said Hezbollah lawmaker Ali Ammar, referring to the name by which the suburb south of Beirut is known.

Hezbollah, much like the Syrian regime, accuses Syrian rebels of being agents of the U.S. and Israel.