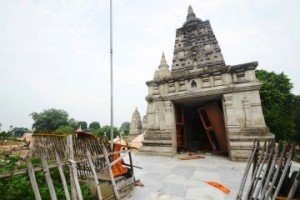 A series of explosions rocked one of Buddhism’s holiest sites in eastern India on Sunday morning, an attack that officials called an act of terrorism.

Two people were wounded in the explosions at the Mahabodhi Temple in Bodh Gaya, officials said. Initial reports suggested that the 12-acre temple complex had suffered minimal damage. The soaring main temple, constructed in the fifth or sixth century, is near the Bodhi Tree, where Buddha is said to have attained enlightenment. The temple complex attracts Buddhists and other visitors from around the world and has been designated as a World Heritage site by Unesco.

“There was some damage to the staircases near the Bodhi Tree, and some windowpanes were broken,” Bhikshu Chalinda, the senior monk at the temple, said in a telephone interview from Bodh Gaya.

In New Delhi, Home Secretary Anil Goswami characterized the explosions as a terrorist attack, though investigators had not identified any suspects or possible motives, and no one immediately claimed responsibility for the bombings.

The Indian news media reported that the Home Ministry had recently asked for additional security at Buddhist shrines and Tibetan settlements. The advisory cited rising tensions related to the ethnic conflict in neighboring Myanmar between Buddhists and Rohingya Muslims.

Buddhists and Muslims have also clashed in nearby Sri Lanka and Bangladesh, but attacks on Buddhists have been relatively rare in India, where sectarian tensions are sometimes simplified as Hindu versus Muslim, but are often far more complicated.

Four explosions occurred inside the temple complex, three others shook a nearby monastery and one went off near a statue of Buddha, Mr. Goswami told reporters. Two other bombs were defused, he said.

In the past, Indian security officials cautioned that the Mahabodhi Temple might be a target for terrorist groups. In October, the Delhi police commissioner, Neeraj Kumar, said suspected terrorists had confessed to visiting the temple complex to plan a possible attack — information that alarmed the monks at the holy site.

“The security of the temple was tightened after that intelligence input last year,” the temple’s senior monk said. “Some metal detectors and more cops and checkpoints were put in place.”

On Sunday, Indian security agencies sent investigators to Bodh Gaya, which is in the state of Bihar, as political leaders condemned the attack. Prime Minister Manmohan Singh said the country’s “composite culture and traditions teach us respect for all religions, and such attacks on religious places will never be tolerated.”