Conditions for Taliban talks not met yet, says Kerry 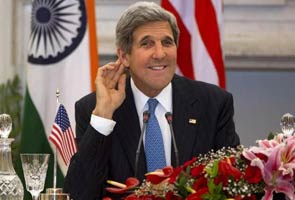 U.S. Secretary of State John Kerry said on Monday that conditions for talks with the Taliban in Afghanistan had not been met yet, after a spat over a new Taliban office in Qatar threatened to derail peace negotiations.

Kerry was speaking at a joint press conference with the Indian foreign minister in New Delhi.

The United States and Taliban insurgents are exploring peace talks in a fresh effort to end Afghanistan’s 12-year-old war, helped behind the scenes by the support of neighboring Pakistan’s powerful military.

India, which jockeys for influence with arch rival Pakistan in Afghanistan, last week warned that any reconciliation should not confer legitimacy on insurgent groups.