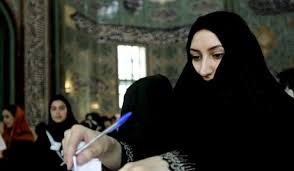 Millions of voters across Iran are due to cast their ballots in the country’s presidential elections, four years after the disputed re-election of Mahmoud Ahmadinejad.

Polling stations opened at 8:00am local time (03:30 GMT) on Friday and close 10 hours later, although if there is a massive turnout the interior ministry can extend voting until midnight.

At the same time as choosing a new president from six candidates, voters will also pick municipal councillors.

Iran’s supreme leader Ayatollah Ali Khamenei, who has called for a large turnout but not publicly stated his preference for any single candidate, will vote early.

If no candidate secures 50.1 percent or more of the votes to win outright on Friday, a second round will be held a week later.

The first results are expected on Saturday.

With the conservative camp divided, reformists seem confident of a good showing by moderate cleric Hassan Rowhani, who has emerged as a frontrunner with a real chance of forcing a run-off, analysts say.

Both sides, reformist and conservative, have appealed for the electorate to turn out in high numbers – the first hoping for change and the other to show the power of a regime accused of seeking to ensure victory for a Khamenei loyalist.

For both reformists and conservatives, the key on Friday will be to mobilise abstentionists who demonstrated against Ahmadinejad’s re-election in 2009, alleging massive electoral fraud.

The authorities cracked down hard on deadly street unrest sparked by that result, leading to the eventual detention under house arrest of two reformist candidates, Mir Hossein Mousavi and Mehdi Karroubi.

Campaigning this time has been dominated by two issues: Iran’s controversial nuclear ambitions and a devastated economy hit hard by international sanctions because of those ambitions.

Inflation is raging at more than 30 percent, the rial has lost nearly 70 percent of its value, and unemployment is rising.

Both Western powers and Israel accuse Tehran of seeking to develop atomic weapons under the guise of a civilian nuclear energy programme, a charge Iran denies.

But neither the United States nor Israel has ruled out taking military action against Iranian nuclear facilities.

Regional tensions have also soared over Iranian support for Syria’s President Bashar al-Assad, a key ally whose regime has faced an uprising for more than two years.