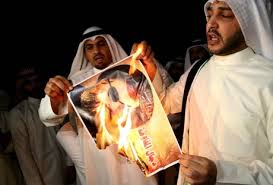 Several Kuwaiti supermarket chains have begun boycotting products from Iran for its support of the Syrian regime, while activists staged a demonstration against the involvement of the Lebanese Hezbollah movement in the conflict.

At least nine cooperative consumer societies out of 50 in the oil-rich Gulf state published announcements in the local media on Wednesday saying they have taken Iranian products off their shelves in protest at Tehran’s backing of President Bashar al-Assad.

Cooperative societies control a majority of the retail consumer market in Kuwait.

One of the announcements said that the next step in the campaign would be to dismiss Iranian labourers working at the societies and cancel their residency permits.

Around 50,000 Iranians work in Kuwait, mostly in low-paid jobs. Iranian exports to Kuwait are not huge and mainly comprise fish and food products.

Meanwhile, dozens of Islamist activists demonstrated outside the Lebanese embassy late Tuesday in protest at the military intervention of Shiite Hezbollah fighters on the side of Syrian regime forces against rebels.

Sunni Muslims, who form more than 70 percent of the 1.2 million Kuwaitis, have been angered by the Syrian government onslaught on fellow Sunni rebels and the support Assad has received from Iran and Hezbollah.

Sunni clerics have launched fund-raising campaigns on the Internet and through mosques to aid the Syrian people as well as the rebellion.

Around a dozen well-known Kuwaiti Sunni clerics have launched an online campaign to raise funds enough to arm 12,000 fighters and send them to Syria. Each fighter is estimated to cost $2,500.

The Gulf Cooperation Council states said on Monday they will take measures against members of Hezbollah.

The measures will affect their “residency permits, and financial and commercial transactions,” said a GCC statement, citing a ministerial council decision.

Photo: Kuwaiti protesters set ablaze a picture of Lebanese Shiite movement Hezbollah’s chief Hassan Nasrallah during a protest in front of the Lebanese embassy against Hezbollah and Iran’s involvement in Syria, in Kuwait city on June 11,2013. (AFP)