Why Sunni-Shia conflict is worsening

When the influential cleric Yusuf al Qaradawi recently called on fellow Sunni Muslims to join the rebels fighting Syrian President Bashar al-Assad’s regime, he effectively called for the Sunni-Shia conflict in the Middle East to escalate in some countries and start anew in others.

Qaradawi said he was not demonizing all Shia Muslims — but that is precisely the effect of his inflammatory words. He denounced al-Assad’s Alawite sect, an offshoot of Shia Islam, as “more infidel than Christians and Jews.” signaling a broader demonization of all Shia. He also said the Lebanese Shia militia Hezbollah (whose name means “the party of God”) is really “the party of the devil.”

“How could 100 million Shia (worldwide) defeat 1.7 billion (Sunnis)?” Qaradawi asked, speaking May 31 in Doha, Qatar, about the two largest Muslim sects. “Only because they (Sunni) are weak,” he said, attempting to inspire the Sunnis to go to Syria to fight against al-Assad and prove their strength.

“I call on Muslims everywhere to help their brothers be victorious,” Qaradawi said in his sermon. “Everyone who has the ability and has training to kill … is required to go” to Syria. “We cannot ask our brothers to be killed while we watch.”

Such provocative statements are classic Qaradawi, whoin 2008 warned of the “Shiitization” of the Middle East. But as a clever operative, he knows this time his statements could escalate the conflict in Syria, Iraq and Lebanon.

Qaradawi’s rhetoric could also embolden the Sunni majority in Saudi Arabia and the Shia majority in Bahrain, where the Sunni royal family is fighting a Shia-led uprising. In addition, his statements could add legitimacy to the alarm in Egypt, where Sunnis fear a possible, though improbable, infiltration of Shia Islam from Iran. 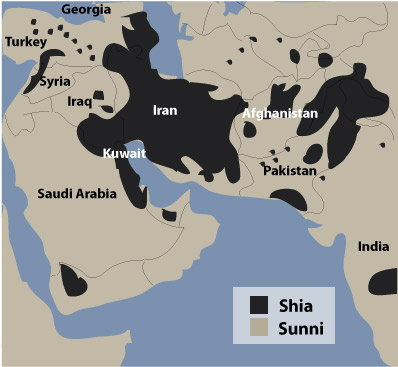 Qaradawi, who is a controversial figure in the West but has millions of Sunni followers, timed his remarks on the heels of a speech a week earlier by Hassan Nasrallah, the Hezbollah leader. Nasrallah acknowledged what had been an open secret — that Hezbollah fighters are in Syria battling the Sunni opposition and supporting the al-Assad regime.

Like Qaradawi, Nasrallah said his condemnation of the Sunnis did not apply to all — just those fighting al-Assad — but he too aimed to escalate the sectarian animosity that has already begun to grip the Muslim world.

What is striking about the statements by Nasrallah and Qaradawi, and their timing, is that the other open secret — a deepening sectarian conflict spreading throughout the region — has now been publicly acknowledged.

In the past, both men attempted to talk in fake pleasantries about the other sect. Nasrallah claimed Hezbollah was fighting the “resistance” (the war against Israel) for all Muslims, and Qaradawi spoke of closing the divide between Shia and Sunni. On May 31, Qaradawi reiterated this message in his Doha speech and explained why he has had a change of heart.

“I kept calling for years (for efforts) to bridge the gap between sects, and traveled to Iran during the era of former President Mohammad Khatami (but) these fanatics (in Iran) and hard-liners want to disempower the Sunnis. They deceived me and deceived many others like me by saying that they, too, want to bridge the differences,” Qaradawi said.

It is entirely possible that escalation of the sectarian conflict will lead to a profound remapping of some Arab states. This is already a likely possibility in Syria. If a negotiated settlement is not reached between al-Assad’s government and the opposition, al-Assad and his minority Alawites could partition the country by forming their own enclave, apart from the Sunni majority.

In Iraq, Prime Minister Nuri Kamal al Maliki is trying to sustain and consolidate Shia dominance by excluding the Sunni from important institutions and labeling them terrorists. More broadly, the country is witnessing a return of Shia-Sunni clashes at the societal level — some of the largest since 2006. Even before the Syrian civil war began, sectarian conflict was a major outcome of the U.S. invasion of Iraq.

In the tug of war between the Shia and Sunni, Nasrallah’s power is likely to diminish while that of Qaradawi is likely to rise. Once a leader who had support among the Sunni for defeating Israel in a battle in 2006, Nasrallah, in fighting for Assad, has transformed himself and his movement into a strictly Shia paramilitary force engaged in a war with an uncertain outcome.

Qaradawi, however, is riding a wave of Sunni triumphalism in the region and his sectarian rhetoric is likely to bolster the Sunni ascendancy, no matter what happens in Syria.

Both men’s words leave little hope for reconciliation between Shia and Sunni, and instead serve as an open invitation for increased sectarian warfare — now more likely than ever to be the most significant outcome of the recent Arab uprisings.

*Geneive Abdo, a fellow at the Stimson Center and a nonresident fellow at the Brookings Institution, is the author of “The New Sectarianism: The Arab Uprisings and the Rebirth of the Shi’a-Sunni Divide.”