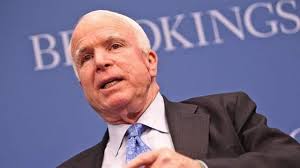 Syrian President Bashar Assad will not end the two-year-old civil war that has killed more than 80,000 Syrians as long as he is winning on the battlefield, and anyone who thinks otherwise is “delusional,” Sen. John McCain said Thursday.

In a major foreign policy speech at the Brookings Institution in Washington, Mr. McCain called on the Obama administration to renew U.S. leadership in the Middle East and develop a credible Syria strategy.

“The longer we wait to take action, the more action we will have to take,” the Arizona Republican said, while conceding that there are no easy options to ending the war in Syria.

Mr. McCain said he favors a negotiated end to the war, but “anyone who thinks that Assad and his allies will ever make peace when they are winning on the battlefield is delusional.”

An international peace conference, backed by the U.S. and Russia and scheduled to be held in Geneva this month, has been postponed to July. The Assad regime says it will attend the conference; the Syrian opposition says it will not.

The regime’s military, supported by Lebanese Hezbollah militants, dealt a significant blow Wednesday to the rebels by seizing the strategic town of Qusair near the Lebanon border.

Mr. McCain said Syria’s civil war is stoking sectarian conflict across the region, a dangerous situation that Iran is exploiting.

“A sectarian battle line is being drawn through the heart of the region — with Sunni extremists, many allied with al Qaeda, dominant on one side, and Iranian-backed proxy forces dominant on the other,” he said. “The entire Middle East is now up for grabs, and our enemies are fully committed to winning … The only power that is not fully committed in this struggle is us.”

Last week, Mr. McCain visited Yemen, Jordan and Turkey, and became the highest-ranking U.S. official to visit Syria since the start of the war in March 2011.

In Syria, he met with the rebels’ top military commander, Gen. Salim Idris, and more than a dozen senior Free Syrian Army commanders in southern Turkey and northern Syria. He said they all told him: “Assad has turned the tide of battle on the ground. His foreign allies have all doubled down on him. Iran is all in. Russia is all in. Shia militants are flowing into the fight from Iraq. And Hezbollah fighters have invaded Syria by the thousands.”

“Every day this conflict grinds on, these extremists are marginalizing moderate leaders like the commanders I met last week — Syrians who don’t want to trade Assad for al-Nusrah,” he said, referring to the al Qaeda-affiliated terrorist group that is fighting against the regime’s forces inside Syria.

Mr. McCain said the U.S. must do more to help the rebels, but that doesn’t mean deploying U.S. troops to Syria or destroying all of the Assad regime’s network of air-defense systems.

Instead, cruise missiles could destroy the regime’s aircraft and ballistic missile launchers; a safe zone could be established on the ground, protected by Patriot missiles, from where the opposition could govern; and a full-scale effort could be launched to train and arm the rebels, he said.

“Would any of this immediately end the conflict? Probably not. But could it save innocent lives in Syria? Could it give the moderate opposition a better chance to succeed? And could it help to turn the conflict in Syria into a strategic disaster for Iran and Hezbollah? To me, the answer to all of these questions is yes,” he said.

France said this week it had evidence that the nerve agent sarin gas has been used in the conflict. The United Nations reacted cautiously to the French claims citing the “absence of convincing evidence of the chain-of-custody of the data collected.”

Mr. McCain said it is clear that President Obama’s “red line” on the use of chemical weapons inside Syria has been crossed.

“If the United States now signals that it is unwilling or unable to meet its own stated commitments and enforce its own declared red lines, that message will be heard loud and clear, far beyond the Middle East,” he said. “It will demoralize our friends, embolden our enemies, and make our world a far more dangerous place for us.”

“If the United States now signals that it is unwilling or unable to meet its own stated commitments and enforce its own declared red lines, that message will be heard loud and clear, far beyond the Middle East,” he said. “It will demoralize our friends, embolden our enemies, and make our world a far more dangerous place for us.”