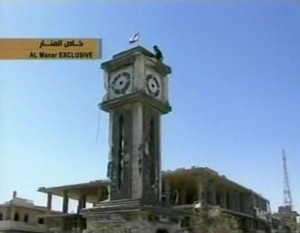 A Syrian flag fluttered over the bullet-pocked clock tower in the center of Qusair on Wednesday as the opposition conceded defeat in the fight for the strategic Syrian town, giving President Bashar al-Assad’s forces the upper hand in the two-year-old conflict and dimming the prospect of peace talks.

For more than two weeks, Qusair has been the scene of a grinding battle as the rebels attempted to repel the advance of the Syrian army, backed by militants from the Lebanese Shiite movement Hezbollah. To the mainly Sunni opposition, the loss of the border town that its forces had held for more than a year comes as a serious blow, cutting supply lines from its supporters in Lebanon, six miles to the west.

To the government, Qusair was essential to its push to regain control of central Syria. The town’s fall adds impetus to a swing in Assad’s favor generated by an inflow of military technology from Iran and Russia and by support from Hezbollah, whose involvement has deepened fears that the conflict could explode into a regional sectarian war.

The boost in confidence for Assad also diminishes hopes for a peace conference that its backers, the United States and Russia, had planned to hold in Geneva this month. With the opposition continuing to refuse participation until Hezbollah and Iran end their “invasion” of Syria, the talks were postponed Wednesday until at least next month.

Outnumbered, outgunned and surrounded, the rebel forces in Qusair had resisted more tenaciously than many had expected, inflicting heavy losses on the Hezbollah militants, known for their prowess in street fighting. But even with reinforcements from their northern stronghold in Aleppo, the rebels could not halt their opponents’ creeping gains.

“It’s a battle that we lost,” the Local Coordination Committees, an opposition activist network, said in a statement, adding that the war is not yet over. The rebel Free Syrian Army put up a strong fight in the face of “missile launchers, mortar shells, airstrikes . . . a strangling siege and a lack of all of the basic needs of life,” it added.

The United Nations had earlier raised concerns about more than 1,000 civilians it said were trapped inside Qusair under constant bombardment, with no access to medical care and basic supplies.

Streets in Qusair, once an opposition bastion and home to 30,000 people, now lie deserted, with buildings reduced to rubble, activists say.

Pro-Assad forces launched a surprise attack Tuesday night, opening up an escape route to the nearby village of Dabaa and to Aarsal, across the Lebanese border, to encourage rebels to leave, a security official with ties to Syrian forces told the Reuters news agency. The evacuation followed reports in the Lebanese news media that Druze leader Walid Jumblatt had been mediating between the Syrian rebels and the Assad government and Hezbollah to ensure a safe exit for civilians.

Wafic Khalaf, a member of the municipal council in Aarsal, said a Syrian helicopter fired four rockets into Lebanon on Wednesday, targeting those fleeing Qusair. More than 100 people were reported to have crossed the border by the end of the day, with a bigger influx expected Thursday. No casualties were reported, but Lebanese President Michel Suleiman urged Syria to refrain from putting Lebanese citizens at risk.

The White House issued a statement Wednesday condemning “in the strongest possible terms” the Assad regime’s offensive in Quasair and Hezbollah’s involvement in it, as well as the attack in Aarsal.

“It’s a battle that we lost,” the Local Coordination Committees, an opposition activist network, said in a statement, adding that the war is not yet over. The rebel Free Syrian Army put up a strong fight in the face of “missile launchers, mortar shells, airstrikes . . . a strangling siege and a lack of all of the basic needs of life,” it added.

“Hizballah and Iran should immediately withdraw their fighters from Syria. We also urge all parties to avoid actions that could exacerbate the already devastating toll of this crisis on civilians and increase the risks of spillover of violence,” the statement said.

Control of Qusair gives the Syrian government a crucial link between the capital, Damascus, and the port cities of Tartus and Latakia, the heartland of Assad’s Shiite-affiliated Alawite sect. It also secures a supply conduit from the Lebanese border, which could prove important for Hezbollah as it appears ready to dig in for a long-term fight in Syria.

A win in Qusair was essential for Hezbollah’s reputation after the movement’s leader, Hasan Nasrallah, promised his men victory in a May 25 speech. Celebratory gunfire erupted Wednesday in the southern suburbs of the Lebanese capital, Beirut, a Hezbollah stronghold that has been counting its war dead from Syria.

“For Hezbollah, their priority now is to help the Syrian army control more and more areas of Syria,” said Mohammad Obaid, an analyst close to the Shiite movement.

Fears were growing Wednesday that pro-Assad forces could make rebel-held areas of Aleppo province their next target, spurred on by the victory in Qusair. Activists and pro-government Web sites were reporting a significant troop buildup near Aleppo city and claims of a Hezbollah presence there.

George Sabra, the acting head of the Syrian Opposition Coalition, said rebels would fight to take back Qusair. He decried what he called Hezbollah’s “murderous” involvement in the battle for the town and said it would exacerbate Sunni-Shiite divisions in the region.

“Hezbollah may provide the regime with a sharper military edge, but at the cost of turning the struggle into a regional Sunni-Shiite war,” said Peter Harling, a Syria analyst with the International Crisis Group. “How is that supposed to bring it to a close?”

The movement’s deepening entanglement in Syria has inflamed sectarian strife in Lebanon, where clashes in the northern city of Tripoli have continued almost unabated for two weeks. Meanwhile, Iraq recorded its highest monthly death toll in five years in May — a spike that analysts attributed to heightened sectarian tensions at least partly linked to Syria’s war.

“Hezbollah may provide the regime with a sharper military edge, but at the cost of turning the struggle into a regional Sunni-Shiite war,” said Peter Harling, a Syria analyst with the International Crisis Group. “How is that supposed to bring it to a close?”