Drawings by Syrian children reveal the horror of war 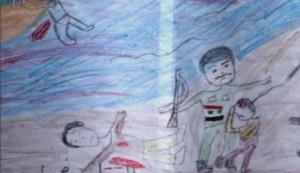 The drawings by Syrian children taking refuge inside Jordan reveal the horror they witnessed before fleeing Syria, LBC reported on Tuesday.

Their drawings depict various scenes of war such as shelling of mosques, and shooting at civilians.

Spokeswoman of the United Nations Children’s Fund (UNICEF) said that a huge number of Syrian children have seen horrors that no child should have witnessed.

Over 80,000 people have been killed since the uprising against the regime of President Bashar al-Assad began in Syria in March 2011. The civil war has forced about 1.4 million Syrians to seek refuge in neighboring countries, with 4.25 million more displaced internally.

Lebanon and Jordan have so far taken the lion’s share of Syrian refugees, whose daily outflow has accelerated over recent months and still continues to grow on a daily basis.