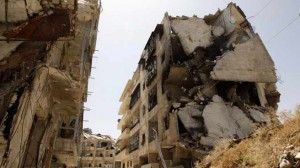 Lebanese security sources said at least 12 rebels were killed in the fighting east of the Bekaa Valley town of Baalbek, but the toll would not be clear until bodies were retrieved from the remote and rugged border area. One Hezbollah fighter also died, they said.

Syria’s two-year-old conflict has increasingly sucked in its smaller neighbor, with fighting shaking the northern Lebanese city of Tripoli and rockets hitting the Bekaa Valley and southern Beirut.

Shi’ite Muslim Hezbollah, which supports President Bashar al-Assad, is fighting alongside his army to drive rebels from the Syrian border town of Qusair, while Lebanese Sunni Muslim fighters have joined the anti-Assad revolt.

Sunday’s fighting took place near Ain el-Jaouze in a strip of Lebanese territory which extends into Syria, the sources said, and the rebels may have been ambushed as they set up rockets to fire into Shi’ite areas of the Bekaa Valley.

Rebels have said they will carry out attacks inside Lebanon in response to Hezbollah’s support for Assad’s assault on Qusair, a strategic town for rebel weapons supplies and fighters coming into Syria from Lebanon.

The United Nations said on Saturday that up to 1,500 wounded people might be trapped inside Qusair and U.N. officials called for an immediate ceasefire to allow them to receive treatment. The International Committee of the Red Cross asked for access, saying it was ready to enter Qusair immediately to deliver aid.

But Syrian state television said Foreign Minister Walid al-Moualem told U.N. Secretary-General Ban Ki-moon by telephone on Sunday that the Red Cross would have to wait until military operations in the area were complete.

Moualem also expressed surprise at international concern over the fighting around Qusair, saying the world had been silent when rebels took over the town 18 months ago and that Syria was now clearing it of “terrorism”, the television said.

The British-based Syrian Observatory for Human Rights, which has a network of medical and security sources on the ground, said heavy fighting continued in the northern, eastern and southern outskirts of Qusair on Sunday.

Security Council diplomats said Russia, which along with China has shielded Assad diplomatically at the United Nations, blocked a council declaration of alarm on Saturday over the two-week-old siege of Qusair.

The draft statement urged forces loyal to Assad and rebels trying to oust him “to do their utmost to avoid civilian casualties and for the Syrian Government to exercise its responsibility to protect civilians”.

It appealed to Assad’s government “to allow immediate, full and unimpeded access to impartial humanitarian actors, including U.N. agencies, to reach civilians trapped in al-Qusair”.

Moscow’s move to block the statement highlights the chasm between Russia and Western nations on how to deal with the war in Syria despite joint efforts by Washington and Moscow to convene a peace conference in the next few weeks.

French Foreign Minister Laurent Fabius suggested on Sunday that the talks could take place in July, echoing comments by officials in the Middle East. He said the Syrian government and the opposition must attend what he called “the last chance” for a negotiated solution.

“It’s not just about getting round the table and then asking what are we going to talk about. It needs to be prepared. That is why I say that the July date would be suitable,” Fabius said.

Assad has lost control of large areas of northern and eastern Syria but his forces have staged fierce counter-attacks in the south and centre, including Damascus, Deraa and Qusair.

The fighting has strengthened Assad’s hand before the proposed peace talks, which the 47-year-old leader says he supports in principle. However, he has dampened prospects of any transfer of his powers to a transitional government – a central element of efforts to secure a political solution. Assad’s opponents have also yet to commit to the peace talks.

U.S. Senator John McCain, a senior Republican who was just in Syria last week, told CBS’s “Face the Nation” he very much doubted whether Assad would seriously engage in the peace talks.

“Anybody that believes that Bashar al-Assad is going to go to a conference in Geneva when he is prevailing on the battlefield, it’s just ludicrous to assume that,” McCain said.

The uprising against Assad, whose Alawite minority is an offshoot of Shi’ite Islam, has killed at least 80,000 people, driven 1.5 million refugees out of Syria and fuelled regional sectarian tensions.

Bahrain’s deputy foreign minister Ghanem al-Buainain told a meeting of Gulf foreign ministers on Sunday that intervention “by some countries” in Syria – singling out Iran and Hezbollah – demanded a “serious stance and common action” in response.

Leading Sunni cleric Sheikh Youssef al-Qaradawi, based in Qatar which has led regional pressure for Assad’s overthrow, called on Saturday for holy war against the Syrian government after intervention by Hezbollah.

The Syrian Observatory said a bomber from the al Qaeda-linked Nusra Front rebel group blew his car up near a police station in the eastern Damascus district of Jobar on Sunday, killing himself and eight members of the security forces.