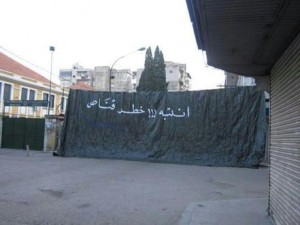 Tripoli, Lebanon – Three people were killed and 29 others injured in renewed clashes between Sunni and Alawite residents of the northern Lebanese capital Tripoli a security source said on Monday.

“The clashes resumed on Sunday night between the mainly Sunni area of Bab el-Tabbaneh and the majority Alawite area of Jabal Mohsen,” the security source said.

NNA added that the snipers “fired on anything that moved” in Bab al-Tabbaneh, Jabal Mohsen, and mainly al-Zahrieh area and the international highway that links Tripoli to Akkar district.

The clashes came after a brief lull in the violence between the two sides, after the latest flare-up that left 31 people dead and more than 200 injured.

The violence is linked to the conflict in Syria, where a Sunni-led uprising is seeking to overthrow the regime of President Bashar al-Assad, an Alawite.

The fighting in Tripoli, which has flared sporadically since the beginning of the Syria conflict in March 2011, has largely been confined to the two neighbourhoods of Jabal Mohsen and Bab el-Tabbaneh.