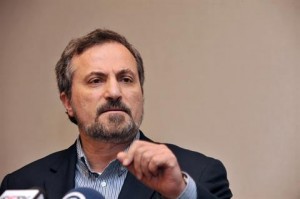 Syria’s opposition on Tuesday described as “too little, too late” an EU decision to lift an arms embargo on rebels fighting the regime of President Bashar al-Assad.

“Definitely it is a positive step, but we are afraid it could be too little, too late,” Louay Safi (pictured) , spokesman for Syria’s main opposition National Coalition, told AFP.

The European Union agreed Monday to lift its embargo against arming Syria’s rebels, but no member state intends to send any arms in the coming months for fear of endangering a US-Russian peace initiative dubbed Geneva 2.

A French official in Paris stressed that “this is a theoretical lifting of the embargo. In concrete terms, there will be no decision on any deliveries before August 1”.

“The Syrian people are disappointed. They thought that democracies care about those who seek democracy,” Safi told AFP on the sidelines of an opposition meeting in Istanbul that has been stalled by divisions.

“We need to provide protection for civilians, for the Syrian people. Weapons would be one element but also we would like to have a more serious position taken, a firm decision taken by the European Union,” he added.

A rebel spokesman inside Syria also lashed out against the EU decision.

“Why wait until August? Why wait another two months? So that the Syrian people continue to be subjected to genocide?” Qassem Saadeddine told AFP by telephone.

“We need anti-aircraft rocket launchers and anti-tank missiles,” he added.

Meanwhile Russia, which has supported Assad, said the EU’s decision to lift the arms embargo on the rebels “directly harms” the prospects of convening a conference on the Syrian crisis.

The proposed “Geneva 2” meeting is expected to happen some time next month after US Secretary of State John Kerry and Russian Foreign Minister Sergei Lavrov agreed in May to try and bring the warring sides together at conference.