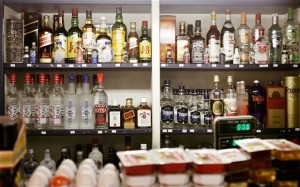 All advertisement and promotion of alcohol will be barred under the law, and sales at stores banned between 10 p.m. and 6 a.m. under a clause added shortly before the measure passed the parliament in Ankara last night. President Abdullah Gul, a former member of Erdogan’s party, must sign the legislation before it is published in the Official Gazette and takes effect.

Erdogan banned alcoholic beverages at municipally run restaurants when he was Istanbul’s mayor in the 1990s. The new law is the toughest nationwide curb on alcohol introduced since his Islamist-rooted Justice and Development Party came to power more than a decade ago. The premier said last month that ayran, a salted yogurt drink, was predominantly Muslim Turkey’s national beverage, rather than anything alcoholic.

Diageo Plc (DGE), the world’s largest distiller of alcoholic beverages, expressed concern over proposed curbs. Diageo paid $2.1 billion in 2011 for Mey Icki, a producer of the traditional Turkish spirit raki. The London-based company said yesterday that it had invested in “a company with strong alcoholic trademarks and in a country which was encouraging foreign investments.”

Finance Minister Mehmet Simsek told reporters in Istanbul that the law may lead to lower tax revenue if it reduces demand for alcoholic drinks, though he said the government has “no guess” about the extent. Turkey collects about 8 billion liras ($4.3 billion) a year of alcohol taxes, he said.

In the parliament debate, opposition lawmakers accused Erdogan and his party of social engineering.

“This is a religious, ideological enforcement,” said Musa Cam of the secular Republican People’s Party. “What they want to do is to redesign the society based on their own beliefs and culture.”

Hasip Kaplan, a Kurdish lawmaker, said the ruling party was imposing its “own lifestyle” on the nation. He warned that the law will hurt tourism, which “can’t recover easily once collapsed,” according to the state-run Anatolia agency.

Sureyya Sadi Bilgic, a lawmaker from Erdogan’s party, said the bill was “never intended to curb freedoms of drinking” and only aims to protect children and youths from bad habits.

Turkish alcoholic drinks will carry health warnings on packaging under the law, which also forbids television programs from encouraging the use of alcohol. Deputy Prime Minister Bulent Arinc has repeatedly objected to drinking scenes in popular soap operas. Violators of the promotion bans can be fined as much as 200,000 liras ($108,000).

The law will hurt business and exceeds its stated mandate of protecting minors, Turyid, a group representing Turkish restaurants and entertainment companies, said in a statement on May 16. It said Turkey has Europe’s lowest alcohol consumption at 1.5 liters per capita.

Erdogan’s party attempted to criminalize adultery in 2004, before stepping back under pressure from the European Union.