Hezbollah may be hurting itself, report 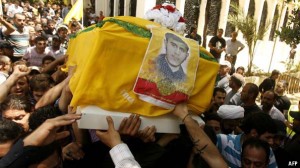 NEW pennants hailing the “martyred” men of Hezbollah, Lebanon’s main Shia party-cum-militia, fly in abundance in its stronghold in the Bekaa valley in eastern Lebanon. By some tallies more than 30 of its fighters have perished since May 19th, as the group backs the Syrian regime in a battle to retake Qusayr, a rebel stronghold close to the border with Lebanon. This is heightening fears that Lebanon itself will be engulfed in the conflict.

Hezbollah, which relies on Damascus as a conduit for weapons from its patron Iran, had previously stepped in to protect Shia villages along the ill-defined border and had seconded its fighters to guard the Sayda Zeinab shrine in Damascus, one of the holiest for Shia Islam. But Hezbollah has recently become more deeply involved in the Syrian civil war—and more open about it. Because Qusayr is on a supply route from Lebanon to Syria’s rebels, the battle for it brings Hezbollah face-to-face with its foes in both countries. Meanwhile, Lebanese Sunni militants are increasingly backing Syria’s rebels.

Hezbollah’s involvement may hurt the movement, too. Its original raison d’être of opposing Israel seems to have switched—in the view of many Muslim as well as Christian Lebanese—into oppressing fellow Muslims

Lebanon, though eternally fractious, has so far proved resilient. Its government, in which Hezbollah has a main part, has pledged to keep out of Syria’s conflict, but that is now wishful thinking. Syria’s rebels have shelled the Shia-populated Lebanese town of Hermel. Jabhat al-Nusra, a Sunni extremist rebel group in Syria with links to al-Qaeda, has threatened to “burn Beirut”, Lebanon’s capital. Tension will rise further if Israel launches air raids, as it has done several times since January, to deter Iran from funnelling weapons through Syria to Hezbollah.

While sectarian violence peppers the borders of Lebanon, its members of parliament have failed to agree to an election law for polls set for June. The current parliament’s term will probably be extended. But without a clear majority it will be weaker than usual, just when the country is especially fragile. Yet Hezbollah’s involvement may hurt the movement, too. Its original raison d’être of opposing Israel seems to have switched—in the view of many Muslim as well as Christian Lebanese—into oppressing fellow Muslims.