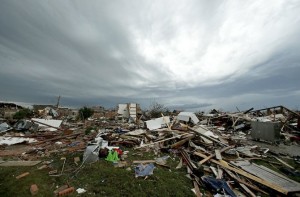 Everything had to come together just perfectly to create the killer tornado in Moore, Okla.: wind speed, moisture in the air, temperature and timing. And when they did, the awesome energy released over that city dwarfed the power of the atomic bomb that leveled Hiroshima.

On Tuesday, the National Weather Service gave it the top-of-the-scale rating of EF5 for wind speed and breadth, and severity of damage. Wind speeds were estimated at between 200 ( 320 Km/h )and 210 mph ( 336 km/h. The death count is 24 so far, including at least nine children. The United States averages about one EF5 a year, but this was the first in nearly two years.

To get such an uncommon storm to form is “a bit of a Goldilocks problem,” said Pennsylvania State University meteorology professor Paul Markowski. “Everything has to be just right.”

For example, there must be humidity for a tornado to form, but too much can cut the storm off. The same goes with the cold air in a downdraft: Too much can be a storm-killer.

But when the ideal conditions do occur, watch out. The power of nature beats out anything man can create.

“Everything was ready for explosive development yesterday,” said Colorado State University meteorology professor Russ Schumacher, who was in Oklahoma launching airborne devices that measured the energy, moisture and wind speeds on Monday. “It all just unleashed on that one area.”

Several meteorologists contacted by The Associated Press used real time measurements, some made by Schumacher, to calculate the energy released during the storm’s 40-minute life span. Their estimates ranged from 8 times to more than 600 times the power of the Hiroshima bomb, with more experts at the high end. Their calculations were based on energy measured in the air and then multiplied over the size and duration of the storm.

An EF5 tornado has the most violent winds on Earth, more powerful than a hurricane. The strongest winds ever measured were the 302 mph reading, measured by radar, during the EF5 tornado that struck Moore on May 3, 1999, according to Jeff Masters, meteorology director at the Weather Underground.

Still, when it comes to weather events, scientists usually know more about and can better predict hurricanes, winter storms, heat waves and other big events.

That’s because even though a tornado like the one that struck Moore was 1.3 miles wide, with a path of 17 miles long, in meteorological terms it was small, hard to track, rare and even harder to study. So tornadoes are still more of a mystery than their hurricane cousins, even though tropical storms form over ocean areas where no one is, while this tornado formed only miles from the very National Weather Service office that specializes in tornadoes.

“This phenomenon can be so deadly you would think that something that catastrophic, that severe would lend itself to understanding,” said Adam Houston, meteorology professor at the University of Nebraska, Lincoln. “But we’re fighting the inherent unpredictability of these small-scale phenomena.”

Unlike hurricanes, which forecasters can fly through in planes and monitor with buoys and weather stations, usually over a period of days, tornadoes form quickly and normally last only a matter of minutes. While meteorologists and television hosts chase tornadoes and try to get readings, it’s not usually enough. This storm lasted 40 minutes – long for a regular tornado but not too unusual for such a violent one, said research meteorologist Harold Brooks at the National Severe Storms Laboratory in Norman, Okla.

Still, the conditions needed to form such a violent and devastating tornado were there and forecasters knew it, warning five days in advance that something big could happen, Brooks said.

By Monday morning, forecasters at the National Weather Center, home of the storm lab and storm prediction center, knew “that any storm that formed in that environment had the potential to be a strong to violent tornado,” he said.

“This is a pretty classic setup,” Brooks said.

Tornadoes have two main ingredients: moist energy in the atmosphere and wind shear. Wind shear is the difference between wind at high altitudes and wind near the surface. The more moist energy and the greater the wind shear, the better the chances for tornadoes.

But just because the conditions are right doesn’t mean a violent tornado will form, and scientists still don’t know why they occur in certain spots in a storm and not others, and why at certain times and not others.

On Monday, the moist energy came up from the Gulf of Mexico, the wind shear from the jet stream plunging from Canada. “Where they met is where the Moore storm got started,” Brooks said.

With the third strong storm hitting Moore in 14 years – and following roughly the same path as an EF5 that killed 40 people in 1999 and an EF4 that injured 45 others in 2003 – some people are wondering why Moore?

It’s a combination of geography, meteorology and lots of bad luck, experts said.

If you look at the climate history of tornadoes in May, you will see they cluster in a spot, maybe 100 miles wide, in central Oklahoma, Houston said. That’s where the weather conditions of warm, moist air and strong wind shear needed for tornadoes combine, in just the right balance.

“Central Oklahoma is a hot spot and there’s a good reason for it,” Houston said. “There’s this perfect combination where the jet stream is strong, the instability is large and the typical position for this juxtaposition climatologically is central Oklahoma.”

The hot spot is more than just the city of Moore. Several meteorologists offer the same explanation for why that Oklahoma City suburb seemed to be hit repeatedly by violent tornadoes: Bad luck.

Of the 60 EF5 tornadoes since 1950, Oklahoma and Alabama have been struck the most, seven times each. More than half of these top-of-the-scale twisters are in just five states: Oklahoma, Alabama, Texas, Kansas, and Iowa. Less than 1 percent of all U .S. tornadoes are this violent – only about 10 a year, Brooks said.

The United States’ Great Plains is the “best place on Earth” for the formation of violent tornadoes because of geography, Markowski said. You need the low pressure systems coming down off the Rocky Mountains colliding with the warm moist unstable air coming north from the Gulf of Mexico.

Scientists know the key ingredients that go into a devastating tornado. But they are struggling to figure out why they develop in some big storms and not others. They also are still trying to determine what effects, if any, global warming has on tornadoes. The jet stream can shift to cause a record number of tornadoes – or an unusually low number of them.

Early research, much of it by Brooks, predicts that as the world warms, the moist energy – or instability – will increase, and the U.S. will have more thunderstorms. But at the same time, the needed wind shear – the difference between wind speed and direction at different altitudes – will likely decrease.

The two factors go in different directions and it’s hard to tell which will win out. Brooks and others think that eventually there may be more thunderstorms and fewer days with tornadoes, but more tornadoes on those days when twisters do strike.

“Tornadoes are perhaps the most difficult things to connect to climate change of any extreme,” said NASA climate scientist Tony Del Genio. “Because we still don’t understand all the factors required to get a tornado.”