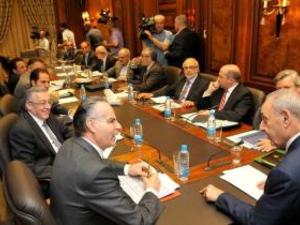 The Lebanese Parliament electoral subcommittee adjourned on Saturday its seventh round of talks for further consultations over a new electoral law as the rival parties failed once again to reach consensus.

The session, which was chaired by Lebanon Speaker Nabih Berri, was adjourned to Monday.

Future Movement parliamentary bloc MP Ahmed Fatfat lashed out at the parties that rejected the adoption of a hybrid electoral draft-law as “it is an adequate replacement for the Orthodox Gathering proposal and the 1960 law.”

He told reporters that Hezbollah MPs will not attend any parliamentary session if the hybrid-law was put for voting “which makes the 1960 law our only option.”

Fatfat said that Speaker Berri rejects calling for a parliamentary session for a vote on the proposed electoral law if the rival parties failed to reach a consensual over it during the subcommittee meetings.

Lebanese Forces MP George Adwan said that the Lebanese are not able to agree on an electoral law made-in-Lebanon.

“It is shameful that we can’t even reach consensus on a vote law,” Adwan said.

He slammed the rival parties, noting that the only obstacle blocking consensus is that each party aims at scoring a point in politics and in the polls.

“We are running out of time but I am positive that we can reach consensus without any interference,” the lawmaker said.

Change and Reform bloc MP Alain Aoun told reporters gathered at the parliament : “We have reached a dead-end, ” adding : “We will either have to adopt the 1960 electoral law or extend the mandate of the current parliament.”

Hezbollah’s bloc MP Ali Fayyad said that the March 8 alliance entered the session with an intention to reach an agreement with the foes but unfortunately we failed.

“We all feel responsible and are seeking a consensual electoral law,” Fayyad told reporters.

An amended version of the 1960 law was adopted in the 2009 parliamentary elections, but the majority of the political blocs are refusing to adopt it for this year’s polls.

Its death came about after Lebanese Forces and The Future Movement backed by the PSP agreed on a hybrid electoral law which calls for 54% of the MPs to be elected under the majoritarian winner-takes-all system and 46 % under the proportional representation system. This draft law was rejected by the Hezbollah-led March 8 opposition.

President Michel Suleiman circles reported on Friday that the president opposes extending the term for more than four months.

While president Suleiman wants to limit the extension to maximum 4 months Speaker Berri is insisting that te ter should be extended to at least 2 years , al Akhbar newspaper reported , stressing that it ( 4 months extension) violates regulations that say that the extension of parliament will entail the extension of the term of all other institutions, including his term as speaker.