Dark, massive asteroid to fly by Earth on May 31 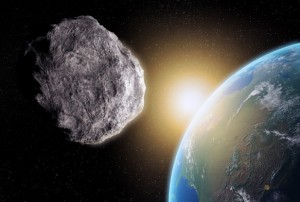 It’s 1.7 miles long. Its surface is covered in a sticky black substance similar to the gunk at the bottom of a barbecue. If it impacted Earth it would probably result in global extinction. Good thing it is just making a flyby.

Scientists are not sure where this unusually large space rock, which was discovered 15 years ago, originated from. But the mysterious sooty substance on its surface could indicate it may be the result of a comet that flew too close to the sun, said Amy Mainzer, who tracks near-Earth objects at Jet Propulsion Laboratory in La Cañada Flintridge. It might also have leaked out of the asteroid belt between the orbits of Mars and Jupiter, she said.

We will know more after the asteroid zips closer to Earth and scientists using the Deep Space Network antenna in Goldstone, Calif., and the Arecibo Observatory in Puerto Rico can get a better look at it. Astronomers at both observatories plan to track it closely from May 30 to June 9, according to a JPLrelease. 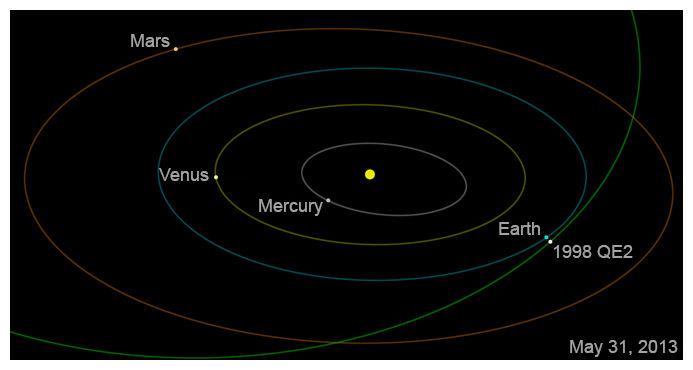 At its closest approach the asteroid will still be 3.6 million miles from our planet (about 15 times the distance between the Earth and the moon), but it will be close enough for these powerful radar antennas to see features as small as 12 feet across.

“With radar we can transform an object from a point of light into a small world with its own characteristics,” Lance Benner, JPL’s principal investigator for Goldstone radar observations, said in a statement.

There is no chance that asteroid 1998 QE2 could collide with Earth this go-around, and its next close approach won’t be until 2119.

Still, Mainzer said the size of the asteroid, and its potential for mass destruction, should remind us that there are some scary things flying around in space.”This is a really big asteroid, similar in size to the one that killed off the dinosaurs, and it’s getting very close to us,” she said. “Fortunately we’ve been tracking its orbit very carefully so we know with great certainty it won’t hit us.

“We don’t need to panic, but we do need to pay attention,” she said.