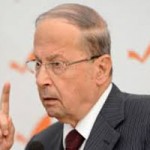 Change and Reform bloc leader MP Michel Aoun defended during a dinner on Saturday evening Hezbollah’s siding with the Syrian regime in its crackdown against the pro democracy uprising, citing the protection of the Lebanese people in Syria as the main cause of the intervention.

“Hezbollah’s intervention in fighting only started when towns inhabited by Lebanese people fell in the hands of the [rebels] and they addressed the issue from outside the Lebanese borders.” He said.

Aoun, a close ally of Hezbollah and Syria said that those sending weapons and funding the war in Syria are acting like “victims.”

“The ones sending weapons and funding the war in Syria are acting like victims,” Aoun said.

Hezbollah militants are leading the fight against rebels in the region of Al-Qusayr in the central province of Homs, the Syrian Observatory for Human Rights reported.

Fighting has spilled over into Lebanon, with rebels reportedly targeting border towns inside Lebanon in response to Hezbollah involvement in the conflict.

“They are not opposed to the Orthodox proposal because it does not preserve the principle of coexistence, they are only after power and we are striving for justice. That is why we suggested this proposal,” he said.

“Who gave the president the authority to categorize what is constitutional or not? Aoun asked, adding that “this behavior has struck fear into the hearts of many.”

Its death came about after the Lebanese Forces and The Future Movement backed by the PSP agreed on a hybrid electoral law which calls for 54% of the MPs to be elected under the majoritarian winner-takes-all system and 46 % under the proportional representation system. This draft law was rejected by the Hezbollah-led March 8 opposition.

President Suleiman circles reported on Friday that the president opposes extending the term for more than four months.

While president Suleiman wants to limit the extension to maximum 4 months Speaker Nabih Berri is reportedly insisting that it should be extended for at least 2 years , al Akhbar newspaper reported , stressing that it ( 4 months extension) violates regulations that say that the extension of parliament will entail the extension of the term of all other institutions, including his term as speaker.

Worst thing that ever haoppened to the Christians of Lebanon.

During a press conference last Thursday Lebanese Forces leader Samir Geagea slammed Aoun, branding him as the worst thing that ever haoppened to the Christians of Lebanon.

Geagea was responding in his press conference to Aoun’s Wednesday attack after the announcemnet of the electoral law deal reached between the Lebanese Forces, The Future Movemnt and the progressive Socialist Party. Aoun was angered by the agreement since it resulted in the death of the Orthodox Gathering proposed electoral law .

Responding to Aoun’s criticism for abandoning the Orthodox electoral law Geagea said: “Hezbollah does not want the Orthodox Gathering’s proposal, it was just performing a political maneuver”.