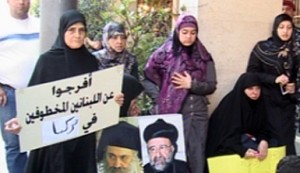 Relatives of Lebanese hostages in Syria’s staged another sit-in on Thursday outside the Turkish Airlines office in Downtown Beirut.

A delegation of the relatives headed to the Ministry of Energy to demand the boycott by caretaker Minister of Energy Gebran Bassil of any Turkish company that may intersted in exploring Lebanon’s oil and gas.

The relatives of the hostages are blaming Turkey despite the fact that Syrian rebels kidnapped them and are holding them in Azaz Syria.

General Security Chief Major General Abbas Ibrahim said last Friday that “positive steps have been made” in the case of the Lebanese hostages in Syria’s Aazaz, adding that the issue is on “the right track.”

On Monday, caretaker Interior Minister Marwan Charbel received from the kidnappers the names of 371 Syrian women detained in Syrian prisons as part of negotiations over a swap deal.

Eleven Lebanese Shiite pilgrims were kidnapped last May on their way back from Iran by insurgents hoping to use them for a prisoner swap . Only two have so far been released.

Their families have vowed to continue their movements until all their loved ones have returned home “safe and sound”.

Over the past month relatives of the hostages held a major demonstrations in Martyrs Square before the Turkish Airline Offices whereby they announced that they would be calling for the boycott of all Turkish products in Lebanon since “Lebanon imports a billion dollars worth of products from Ankara per year.”