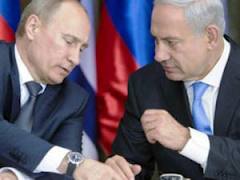 President Vladimir Putin’s talks with Israeli Prime Minister Benjamin Netanyahu in Russia on Tuesday will focus on the situation in Syria, the Kremlin said, amid growing concerns that Moscow may soon provide Damascus with an advanced anti-aircraft weapon.

Israeli officials say Russia is on the verge of selling S-300 anti-aircraft missiles to Syria and they have asked Russia to stop supplying Syrian President Bashar Assad’s regime with such “game-changing” weapons.

Despite the civil war in Syria, Russia has rejected Western demands to halt such sales, arguing that they haven’t violated international law. The Russian arms deliveries have included air defence missiles and artillery systems, but Moscow has so far refrained from providing Damascus with the advanced S-300.

The powerful weapon has a range of up to 200 kilometres (125 miles) and the capability to track down and strike multiple targets simultaneously with lethal efficiency. It would mean a quantum leap in Syria’s air defence capability and pose a strong challenge to any possible aerial campaign. Israel also fears that advanced Russian weapons could fall into the hands of Hezbollah, a key Syrian ally in neighbouring Lebanon.

Israeli Tourism Minister Uzi Landau accused Russia on Monday of destabilizing the Middle East by selling weapons to Assad’s regime. “Anyone who provides weaponry to terror organizations is siding with terror,” Landau said.

Speaking in Warsaw on Friday, Russian Foreign Minister Sergey Lavrov said that Russia was completing the delivery of air defence systems to Syria under earlier signed contracts, but avoided specifying whether the S-300 batteries are among them.

Earlier this month, Lavrov met with U.S. Secretary of State John Kerry, and they announced they would host an international conference during which Syrian government officials and rebels will be offered the chance to name an interim government.

On Friday, Putin met with British Prime Minister David Cameron in Moscow for talks that also centred on Syria.

Cameron said the two were committed to developing a proposal for a Syrian transitional government. The British leader didn’t say if the missile issue was discussed, but Russian news agencies said Moscow had insisted it would honour all earlier signed contracts.

The business daily Kommersant, without citing a source, reported Monday that Putin told Cameron during the talks that the S-300 will be delivered to Syria. But Vyacheslav Davidenko, a spokesman for Russia’s Rosoboronexport state arms trader, refused to comment on the issue Monday.

Russia media have reported that Moscow signed a contract for the delivery of the S-300s to Syria a few years ago, but shelved it under pressure from Israel and the West.

Igor Korotchenko, a former colonel of the Russian General Staff who now heads the Center for Analysis of Global Weapons Trade, said that the decision on the S-300 delivery would have to be made by Putin himself.

“It may lead to a new round of confrontation with the West,” he said. “It will have a serious impact on the balance of forces, depriving Israel of its air superiority.”

Korotchenko added that Syrian crews will have to spend up to one year in Russia training on how to use the S-300 systems. “Without that, the delivery would make no sense,” he said. “It’s a complex system, and only highly qualified crew can handle it.”

Russia has been a key ally of Assad, joining forces with China at the U.N. Security Council to shield his regime from international sanctions.

The Syrian civil war, which began as a popular uprising against Assad in March 2011, has killed tens of thousands of people and displaced several million. The two sides are deadlocked, though the regime has scored recent military gains against the rebels.

Israel has carried out a pair of airstrikes in recent months aimed at halting the transfer of key weapons to Hezbollah. In January, Israel destroyed a shipment of anti-aircraft missiles bound for Hezbollah, and earlier this month, it destroyed Iranian-made guided missiles also believed headed to Hezbollah. Israel has not officially confirmed carrying out the strikes.

Hezbollah is a bitter enemy of Israel. It battled Israel to a stalemate in a month-long war in mid-2006, and already possesses a formidable arsenal of tens of thousands of missiles and rockets.