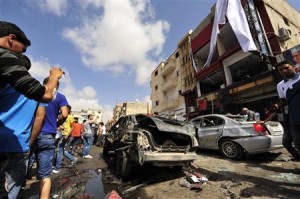 A car bomb killed at least three people outside a hospital in the eastern Libyan city of Benghazi on Monday, witnesses said, in a further sign of the violent disorder plaguing the country since the 2011 revolution that toppled Muammar Gaddafi.

Only one of the dead was carried into the hospital intact, a doctor told Reuters, which made it difficult to immediately establish the number of people killed. Another doctor said three deaths were confirmed including a child, along with 17 injuries.

“I saw people running and some of them were collecting parts of bodies,” said a witness, who declined to be identified.

Hundreds of angry people gathered at the scene, blaming armed groups for the explosion and calling for them to be driven from Benghazi, which was the cradle of the uprising that ended Gaddafi’s 42 years of iron rule.

“This is the flesh of our sons, this is what the militias have given us,” said another witness at the scene. “All we need here are the police and the army.” The post-Gaddafi transitional government exerts scant authority over much of the country.

The blast damaged a dozen or more vehicles and shattered the windows of buildings nearby, send aloft a thick cloud of smoke and flinging dust several blocks away.