PFLP-GC says forming units to fight for the Golan 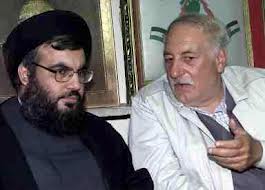 A militant Palestinian group in Damascus said it is forming combat units to try to recapture Israeli-occupied territory, in particular the Golan Heights, after Syrian President Bashar al-Assad and Hezbollah that they would support such operations.
The Popular Front for the Liberation of Palestine-General Command (PFLP-GC) said it was preparing for new operations after nearly 40 years of quiet on the Israel-Syria border.

The group, designated terrorists by the United States and others in the West, was most active in the 1970s and 80s but retains influence with Palestinians in Syria and Lebanon.

“The leadership of the PFLP-GC announces that it will form brigades to work on liberating all violated (Israeli-occupied) territories, first and foremost the occupied Golan,” it said in a statement late on Friday.

“The Popular Front’s leaders have opened the door to all Syrian citizens to volunteer in the formation of the resistance.”

Israel launched a series of air strikes around Damascus last week that inflamed regional tensions already on the rise as Syria’s two-year civil war slowly seeps across its increasingly chaotic and porous borders.

Assad is a pivotal ally of regional Shi’ite power Iran, and is believed to serve as its arms conduit to Hezbollah in neighboring Lebanon.

Assad and his father, who ruled for 30 years before him, maintained calm in the Golan despite an official state of war between the two countries and Syria’s support for militants in Lebanon and Gaza.

But following last week’s strikes, which shook the Syrian capital and set its skyline alight with flames, Assad was quoted by state media as saying he would turn the Golan into a “resistance front” and would allow combatants to attack Israel from the area.

Hezbollah, which fought a 34-day war with Israel in 2006 and is believed to coordinate with the PFLP-GC, turned up the rhetoric further by saying it would support any such operations.

“We announce that we stand with the Syrian popular resistance and offer material and spiritual support as well as coordination in order to liberate the Syrian Golan,” the group’s leader Hassan Nasrallah said in a televised speech on Thursday.

Nasrallah said Syria would defy Israeli strikes by sending his group sophisticated weaponry, which he hinted may change the balance of power in the region.

The regions bordering the Golan Heights have already collapsed into disarray, with daily battles between state forces and rebels fighting to topple four decades of Assad family rule.

The war, which has killed more than 70,000 people, risks becoming increasingly regionalized, as the country’s borders mark the faultlines of several Middle Eastern conflicts.

Photo: File photo of Palestine-General Command (PFLP-GC) chief Ahmad Jibril ( R) and Hezbollah Secretary general Sheikh Hassan Nasrallah. “We announce that we stand with the Syrian popular resistance and offer material and spiritual support as well as coordination in order to liberate the Syrian Golan,” Nasrallah was quoted as saying in a speech last Thursday