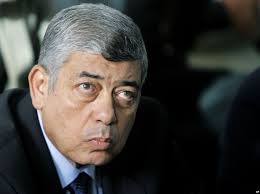 Egyptian security forces have arrested three militants with ties to Al Qaeda who were planning terrorist attacks in Egyptian cities and against a foreign embassy, theinterior minister said Saturday.

A Western official said the Egyptians had privately identified the embassy as the United States Embassy in Cairo.

Interior Minister Mohamed Ibrahim said at a news conference that the suspects had been arrested with 22 pounds of explosive materials and instructions on how to make bombs and build rockets and model airplanes to use in the attacks.

He said the suspects were “on the verge” of attacking an embassy when they were arrested.

He did not identify the embassy, but Egyptian officials have told their American counterparts that the United States Embassy was a target, a Western diplomat said.

The State Department would not comment on the Egyptian allegations. “We don’t discuss the specifics of our operations nor the exchanges we have with foreign officials,” said Jennifer R. Psaki, a department spokeswoman.

Mr. Ibrahim denied that Al Qaeda was active in Egypt, but said the three men had communicated online with a Qaeda figure in Pakistan and that one of them had traveled to Iran and Pakistan to receive military training.

He said a raid on their homes found 22 pounds of aluminum nitrate, which can be used to make explosives; computers containing instructions on how to make bombs, model airplanes and rockets; information on intelligence gathering; and materials published by Al Qaeda in the Islamic Maghreb, the network’s North African affiliate.

The suspects, identified as Amr Abu al-Ela Aqida, Muhammad Hameida Saleh and Muhammad Bayouni, were told by the Qaeda leader, Dawoud al-Asadi, to get in touch with a terrorist cell in the Cairo neighborhood of Nasr City, that security forces broke up last year, as well as with militants in Sinai, Mr. Ibrahim said.

The men had acquired the material to make explosives, he said, and had discussed whether it was better to use a car bomb or explosives detonated by remote control. Late Saturday, a state security prosecutor ordered that two of the men be detained for 15 days while the charges were investigated, according to the Web site of a state newspaper, Al Ahram. The third was put under house arrest while he is questioned.

Many Egyptians worry that extremist groups could take advantage of Egypt’s security vacuum since the revolution in 2011.

In August of last year, 16 Egyptian border guards were killed in Sinai in an attack attributed to Islamic militants.

Photo: Interior Minister Mohamed Ibrahim said at a news conference that the suspects had been arrested with 22 pounds of explosive materials and instructions on how to make bombs and build rockets and model airplanes to use in the attacks.