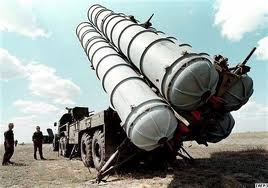 Russia defended its sales of anti-aircraft systems to the regime of Syrian President Bashar Assad, just days after joining forces with the U.S. for a new push to end Syria’s civil war through negotiations.

Russian Foreign Minister Sergey Lavrov avoided saying whether those sales included advanced S-300 batteries. Israel has asked Russia to cancel what it said was the imminent sale of the S-300 missiles, portrayed by U.S. Secretary of State John Kerry as destabilizing to Israel’s security.

The S-300s would make it harder for the U.S. and other countries to even consider intervening militarily or enforcing a no-fly zone in Syria. The U.S. has urged Russia – an Assad ally along with China, Iran and the Lebanese Hezbollah militia – to cut off weapons supplies to Syria.

Despite such disagreements, Russia and the U.S. decided this week to convene an international conference to bring representatives of the Assad regime and the opposition to the negotiating table. Such talks would aim at setting up a transitional government. No date has been set.

The regime and the Syrian opposition have welcomed the idea, but with conditions. The opposition says talks can only begin once Assad and his aides have left. The regime says it will keep fighting the rebels, without saying at which stage it would be willing to halt its fire.

The civil war, which began as a popular uprising against Assad in March 2011, has killed tens of thousands of Syrians and displaced several million. The two sides are deadlocked, though the regime has scored recent military gains.

On Friday, the U.N. commissioner for human rights, Navi Pillay, raised alarm over the western rebel-held town of Qusair, close to Lebanon, which has been besieged by Syrian troops for several weeks.

Pillay said her team reported a major troop buildup in the area and noted that an increasing number of residents were being displaced.

The commissioner said she fears atrocities if Qusair is overrun. Last week, regime forces were blamed for killing dozens of civilians in Banias and Bayda, two communities in western Syria.

“It appears likely that this (the troop buildup) is in preparation for a large-scale attack to uproot the armed opposition from Qusair, and local people clearly fear a possible repeat of last week’s killings of civilians,” she said in a statement.

The Syrian military dropped leaflets over Qusair, urging rebel fighters to surrender, but did not set a deadline for them to do so, according to the office of the Homs governor.

Rebels have lost ground in the area since a Hezbollah-backed government offensive there last month.

Bassam al-Dada, an official in the rebels’ Free Syrian Army, said Friday that more pro-regime forces have been streaming to Qusair, a town of more than 20,000 people south of the city of Homs.

Hezbollah fighters have shelled the town, hitting the main water tank and filtration station, and rebel fighters have responded, al-Dada said by phone from Turkey.

Qusair is important to the regime because the area links the capital of Damascus with the coastal region, where regime loyalists are concentrated. This includes Alawites, followers of an offshoot of Shiite Islam to which the Assad family also belongs. The rebellion against Assad is largely driven by Syria’s majority Sunni Muslims.

By holding Qusair, rebels have been impeding the regime’s military movement and supply chain, said Bilal Saab, director of the Institute for Near East and Gulf Military Analysis, North America. He said he believes the regime is trying to regain as much ground as possible before any negotiations with the opposition on a transition.

Previous attempts to solve the conflict peacefully have run aground, but Saab said this initiative might have a better chance because both Russia and the U.S. are pushing for it.

The plan, similar to one set out last year in Geneva, calls for talks on a transition government and an open-ended cease-fire.

British Prime Minister David Cameron said after a meeting with Russian President Vladimir Putin on Friday that the two agreed leaders that “we must help drive this process.”

Cameron said Russia, America, Britain and other countries should participate in setting up a transitional government. Putin added that “we have a common interest in the cessation of violence as soon as possible.”

At the same time, Russia is going ahead with arms sales, the Russian foreign minister said, portraying the weapons as defensive.

“Russia has been selling for a long time, has signed contracts and is completing deliveries of technology that consists of anti-aircraft systems,” Lavrov said Friday in Warsaw.

Existing contracts are not believed to include the S-300.

The Wall Street Journal earlier this week put that deal at $900 million for four batteries, six launchers and 144 operational missiles. The missiles have a range of 125 miles, the newspaper reported, citing Israeli-provided information, adding that the materiel would start arriving over the next three months.

The S-300 batteries can target manned planes, drones and incoming missiles, and would be a state-of-the-art upgrade of Syria’s aging Soviet-supplied defense system.