Iran FM tells Syria’s Assad: ‘We are with you’ 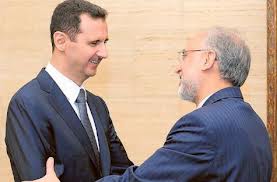 “Salehi arrived in Damascus from Amman and was received by President Bashar al-Assad,” the source said.

In the Jordanian capital, Iran’s top diplomat called for dialogue between the Syrian regime and “peaceful” opposition groups, warning that the impact of the conflict would affect the entire region.

Iran condemned those strikes and has said it is ready to train the Syrian army, which is in its third year of a conflict against rebels seeking to overthrow Assad.

We are with you
Salehi told Assad: “We are with you and we will not allow Syria to fall into the hands of Israel, the US or any infidel,” the Lebanese Al-Mayadeen network reported on Tuesday.

Salehi also said that “the time has come to deter the Israeli occupier from attacking the people of the region.”

Assad: Golan will become the frontline for resistance

Assad responded for the first time to reports of alleged Israeli airstrikes in Syria, saying “the Golan will become the frontline for resistance,” Al-Mayadeen also reported on Tuesday.

Assad spoke during a meeting with the visiting Iranian Foreign Minister , and added that “the Syrian people and military are capable of dealing with the Israeli adventures,” the Syrian official news agency SANA reported.