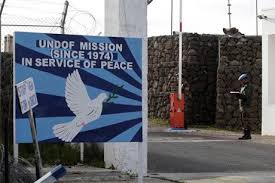 The United Nations says four peacekeepers have been detained by armed men while patrolling on the Golan Heights in an area separating Syria and Israel.

Kieran Dwyer, spokesman for the U.N. peacekeeping department, said the four peacekeepers, all from the Philippines, were taken by an unidentified armed group near Al Jamlah on Tuesday.

He said “efforts are underway to secure their release now.”

The peacekeepers are from a U.N. mission that has monitored a cease-fire line between Israel and Syria for nearly four decades.

safety concerns
Syrian rebels ( Yarmouk Martyrs Brigade) said on Tuesday they were holding U.N. peacekeepers on the ceasefire line between Syria and the Israeli-occupied Golan Heights after clashes in the area had put them in danger.

The Yarmouk Martyrs Brigade made the announcement in a statement on its Facebook page, accompanied by a picture of four peacekeepers wearing light-blue U.N. flak jackets marked “Philippines”.

UN Spokeswoman Josephine Guerrero said on Tuesday that they were taken at Position 86, near the southern end of the narrow “area of separation” between Syrian and Israeli forces.

The Yarmouk Martyrs rebels said they “carried out an operation to secure and protect elements of the United Nations operating in the Yarmouk Valley … during clashes and heavy shelling in the region”.

They said the heavy presence of Assad’s forces posed a danger to the peacekeepers, as well as “criminal elements” in the area.