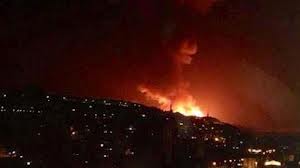 The Syrian government publicly condemned Israel for a powerful air assault on military targets near Damascus early Sunday, saying it “opened the door to all possibilities,” as fear spread throughout the region that the country’s civil war could expand beyond its borders.

The attack, which sent brightly lighted columns of smoke and ash high into the night sky above the Syrian capital, struck several critical military facilities in some of the country’s most tightly secured and strategic areas, killing dozens of elite troops stationed near the presidential palace, a high-ranking Syrian military official said in an interview.

Israel refused to confirm the attacks, the second in three days, and Israeli analysts said it was unlikely that Israel was seeking to intervene in the Syrian conflict. They said the attacks in all likelihood expanded and continued Israel’s campaign to prevent the Syrian government from transferring weapons to Hezbollah, the Shiite militia and political party in neighboring Lebanon that is one of Israel’s most dangerous foes.

Rebels, opposition activists and residents said the strikes hit bases of the elite Republican Guard and storehouses of long-range missiles, in addition to a military research center that American officials have called the country’s main chemical weapons facility.

An American official said a more limited strike early Friday at Damascus International Airport was also meant to destroy weapons being sent from Iran to Hezbollah.

Concerns flared about whether Hezbollah might attack Israel in retaliation, possibly drawing Lebanon into the conflict. Israel deployed two of its Iron Dome missile-defense batteries in its northern cities. Iran’s IRNA news agency said Israel could expect a “crushing” retaliation from Syria or “the resistance,” meaning Hezbollah.

Analysts said Syria, weakened by the conflict, and Hezbollah, overstretched as it commits more forces to support the Syrian government, were unlikely to act, but they cautioned that a miscalculation by either side that set off an escalation could not be ruled out. And President Bashar al-Assad could choose to mount covert attacks on Israeli targets abroad, rather than engage its military directly.

One senior Israeli official, who spoke on the condition of anonymity, said he did not think that Israel was entering a war with Syria and suggested that Syria was unlikely to respond. Mr. Assad “has his own problems,” the official noted. “He doesn’t need Israel in the mess.”

In Washington, the reported Israeli attacks stoked debate about whether American-led airstrikes were the logical next step to cripple the ability of the Syrian president to counter the rebel forces or use chemical weapons. That was already being discussed in secret by the United States, Britain and France in the days leading to the Israeli strikes, according to American and foreign officials involved in the discussions, with a model being the opening days of the attacks on Libya that ultimately drove Col. Muammar el-Qaddafi from power.

Lawmakers from both parties urged President Obama to move toward arming the rebels. “The idea of getting weapons in — if we know the right people to get them — my guess is we will give them to them,” Senator Patrick J. Leahy, Democrat of Vermont, said on NBC’s “Meet the Press.”

The White House declined to say whether it believed Israel was responsible for the Damascus explosions, though other American officials said there was no plausible alternative, given the size and precision of the strikes. Josh Earnest, the deputy press secretary, echoed statements by Mr. Obama last week, saying “the Israelis are justifiably concerned about the threat posed by Hezbollah obtaining these advanced weapon systems.”

The Syrian deputy foreign minister, speaking on CNN, called the strikes “an act of war.” But the decision to blame Israel so publicly presented Mr. Assad with a difficult choice. He could retaliate against Israel and risk conflict with the region’s strongest military — an option analysts called unlikely. Or he could refrain, in which case he risks appearing further weakened and hypocritical to supporters and opponents alike, many of whom are united in their antipathy for Israel.

“Why does the regime attack the rebels with Scuds and warplanes while it takes no action on the Israeli raids?” Basil, 35, who lives near the military research center, in Jamraya, asked as he and his wife swept broken glass from their house on Monday.

Noureddin, 50, a lawyer, lives in the Doumar Project neighborhood, where the blasts knocked kitchen crockery from shelves and drove residents into basements for shelter. Noureddin said the attack would anger members of Mr. Assad’s Alawite sect, who make up the bulk of the military elite and his strongest base of support, already frustrated with their mounting death toll.

“Today, President Bashar al-Assad is in a very hard position with his Alawite community,” he said. In a play on Mr. Assad’s surname, which means lion in Arabic, he added, “Today, Israel kills the Alawite soldiers who are protecting the lion’s den.”

The airstrikes shocked residents of Damascus, a relative bubble of security, literally shaking some out of bed. It was a display of firepower far greater than any seen near the capital in two years of war.

At the military’s Tishreen Hospital on Monday, a doctor said that there were at least 100 dead soldiers and many dozens more wounded.

While much of the region debated the military and political impact, Damascus felt like a city on high alert.

Hassan Husseini, 41, said that at 4 a.m., two hours after the blasts, he drove a friend home from his house in Malki, at the foot of Mount Qasioun, where in safer times Mr. Assad lived in an apartment with his family. Mr. Husseini said he was still reeling from the blasts: “The walls were moving, and the ground was trembling under us.”

Soldiers at the city’s ubiquitous checkpoints inspected his car unusually carefully, he said.

“There was tension,” he said. “You could sense the alertness in the houses and among people; everybody was awake.”

Mr. Husseini saw people clustered at windows and on balconies. “Some lights were on,” he said, “but even when they were off I saw them moving behind windows like ghosts.”

The military impact, though, was less clear.

Within hours, the rebel Damascus Military Council declared that it would try to capitalize. The council issued a statement calling on all fighters in the area to work together, put aside rivalries and mount focused attacks on government forces.

But Louay Mekdad, a spokesman for the Supreme Military Council, considered Washington’s best option for a military ally among the rebels, said the strike by itself would not present an opportunity to tip the balance.

The elite Republican Guard units that the Syrian official said had been hit are currently believed to have little involvement in the fighting against Syria’s rebels, though they are a last-resort line of defense.

“Does this erode the regime’s long-term capability? Undoubtedly,” said Emile Hokayem, an analyst with the International Institute for Strategic Studies. “Does this create a short-term opportunity for the opposition? It’s doubtful.”

The Syrian military official said he believed that Israel and the rebels had collaborated in a plan for opposition forces to advance after the strikes hit elite forces in one of the few areas on the outskirts of Damascus where rebels have made few inroads. But Israeli analysts suggested that any deaths of Republican Guards, who were guarding weapons stockpiles, were probably incidental.

Some analysts said Israel may have been sending a message to its main rival, Iran, that despite recent gains by Mr. Assad’s forces, the alliance between Iran, Syria and Hezbollah has waning power to check Israeli action.

Syrian state television said the explosions confirmed what the government has been contending all along: that the rebels are part of an American-Israeli conspiracy to target Mr. Assad for his support of Palestinians and opposition to Western policies in the Middle East.

But a longstanding refrain among fighters and activists has been that Mr. Assad’s anti-Israel stance was a sham. They say that while the government’s security forces and military failed to prevent the Israeli strikes — and for that matter have not clashed with Israel since 1973 — they have killed tens of thousands of Syrians and jailed many more to hold on to power.

Some rebels and activists say they consider Mr. Assad a far higher-priority target than Israel, though they still oppose it. The main exile Syrian opposition coalition walked that line carefully in a statement issued after the bombings, blaming the government for allowing attacks by “external occupying forces.”

“The Assad regime has never focused on fighting the Israeli Army; it’s focus has only been on oppressing the Syrian people,” he said. “From the start our goal has been to topple the regime, and we will continue.”

Also, as the conflict takes on an increasingly sectarian cast, some rebel fighters say that for the Sunni-dominated rebellion, the greatest enemy is not Israel but Shiite-dominated Iran and Hezbollah, as well as the Alawite sect, an offshoot of Shiism.

Mr. Mekdad of the Supreme Military Council said that the opposition had only one target: Mr. Assad’s government.

“The Assad regime has never focused on fighting the Israeli Army; it’s focus has only been on oppressing the Syrian people,” he said. “From the start our goal has been to topple the regime, and we will continue.”