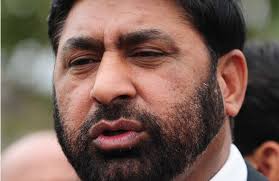 Gunmen fatally shot a Pakistani prosecutor who had been investigating the murder of former prime minister Benazir Bhutto and the 2008 Mumbai attacks, carrying out an assassination that threw into turmoil Pakistan’s most politically charged cases.

Assailants opened fire on Chaudhry Zulfikar Ali as he was leaving his home in a suburb of the capital, Islamabad, for a court hearing in which the former military leader, Pervez Musharraf, faces charges in relation to Ms. Bhutto’s death.

Initial reports said that gunmen traveling by motorbike and car sprayed Mr. Ali’s car with bullets, wounding his bodyguard and killing a woman passer-by when his car veered out of control. Television footage from the scene showed a bullet-riddled car crashed by the roadside.

Mr. Ali died before he reached a hospital in Islamabad, where a doctor said he had been shot 13 times. One reporter at the scene said that one of the assailants had been wounded by Mr. Ali’s bodyguard but managed to escape.

Mr. Ali represented the Federal Investigation Agency, which has implicated Mr. Musharraf in the case of Ms. Bhutto, who was assassinated in December 2007, just before the last election.

But he was also involved in another sensitive case: the trial of seven people from the militant group Lashkar-e-Taiba who have been charged with orchestrating the Mumbai attacks of November 2008.

After a court hearing on April 30, Mr. Ali told reporters there was “solid evidence” that connected Mr. Musharraf with Ms. Bhutto’s death. Investigators had compiled evidence that “directly connect the accused” with the killing, he said.

Mr. Ali was also involved in other prominent cases including the militant assault on the military’s general headquarters in Rawalpindi in October 2009, and the trial of militants accused of orchestrating the Mumbai attacks.

The killing comes at a politically sensitive time, with Pakistanis due to go to the polls for a general election on May 11. Campaigning has been marred by widespread Taliban violence against candidates from secular parties.

Mr. Musharraf, who returned from exile in order to contest the election last month, faces charges in several cases related to his time in power, including the murder of Ms. Bhutto, the killing of a Baloch nationalist leader, and the firing of senior judges.

Mr. Musharraf has been disqualified from contesting the election and earlier this week a court banned him from politics for life. The retired general also faces possible treason charges, although no decision will be taken until a new government is formed after the May 11 election.

A lawyer for Mr. Musharraf condemned the killing shortly afterward and said that killers should be brought to justice.

In the court hearing in nearby Rawalpindi, lawyers for Mr. Musharraf argued that he should be exempted from appearing in person in the case, Pakistani television stations reported. The hearing was adjourned until May 14.