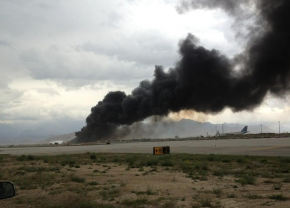 A cargo plane crash in Afghanistan killed all seven crew members on board Monday.

The crash happened shortly after takeoff from Bagram Air Base in Afghanistan, the U.S.-based company said. The Boeing 747-400 was en route to Dubai, United Arab Emirates.

“This was a purely cargo flight and no passengers were aboard,” a company statement said. “Cargo consisted of vehicles and routine general cargo.”

National specializes in moving freight for the military and businesses, as well as charter passenger service in the Middle East.

The cause of the crash has not been determined.

“This is a devastating loss for our family and we’ll work diligently with authorities to find the cause,” National Airlines President Glen Joerger said in the statement.

“Our focus at this time is on the family members of those we’ve lost, and on assisting the NTSB (National Transportation Safety Board) and Afghanistan Civil Aviation Authority in their investigations.”