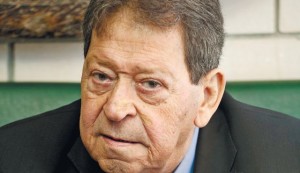 A former Israeli defense minister alleged Monday that Syria’s chemical weapons are “trickling” to the Lebanese militant group Hezbollah, the first claim by a senior politician in Israel that one of the country’s nightmare scenarios is coming true.

Binyamin Ben-Eliezer, who also called for international intervention in the Syria’s civil war to stop mass civilian deaths, did not supply any evidence for his claim.

“The process of weapon transferal to Hezbollah has begun,” Ben-Eliezer told The Associated Press. He refused to elaborate.

Ben-Eliezer, a retired general who is now a lawmaker from the opposition Labor party, also told Israel Radio that he “has no doubt” that Syrian President Bashar Assad has already used chemical weapons and that that “these weapons are trickling to Hezbollah.”

His statements do not represent an official assessment and defense officials say that, while they are concerned about Hezbollah getting chemical weapons, they are assuming it has not yet done so.

Israel has repeatedly expressed concern that Syria’s chemical arsenal could fall into the hands of anti-Israel militants like Lebanon’s Hezbollah, an Assad ally, or an al-Qaida-linked group fighting with the rebels. Prime Minister Benjamin Netanyahu has warned that militants getting chemical arms or other sophisticated weapons is a red line that could trigger military action.

Israel is widely believed to have carried out an airstrike in Syria early this year on a shipment of sophisticated anti-aircraft missiles allegedly bound for Hezbollah. Israel has all but confirmed it carried out the attack.

Although Assad is a bitter enemy, Israel has been careful not to take sides in Syria’s civil war, partly because the Assad family has kept the border with Israel quiet for the past 40 years and because of fears of what would happen if he is overthrown. Israeli military officials believe some Syrian opposition groups, especially those affiliated with the al-Qaida terror group, will turn their focus toward Israel once Assad is ousted.

Ben-Eliezer said he is “amazed by the silence of the world” and that the international community needs to intervene to end the high civilian death toll in Syria’s civil war. He said Israel should consider action if there is no international intervention.

“I wouldn’t rule out preparing a plan for Israel to act if the world continues to remain silent and the weapons continue to flow to Hezbollah. These are crazy people, terrorists who will not hesitate to use this tomorrow morning,” he said.

Both sides in Syria’s civil war accuse each other of using chemical weapons in the war, which according to the U.N. has killed more than 70,000 people.

The U.S. has warned such weapons cross a red line and last week said the weapons were probably used, though it still seeks definitive proof.

Last week, Brig. Gen. Itai Brun, the head of research and analysis in Israeli military intelligence, said Assad’s soldiers had used chemical weapons against rebels. He said sarin, a lethal nerve agent, was probably used in one instance. He cited images of alleged victims of the attacks foaming at the mouth and displaying other apparent symptoms of chemical attacks as part of the evidence.

The Israeli government convened its Security Cabinet to discuss Syria on Sunday but no details were released.