Battle in Homs could drive Syria to divide into four 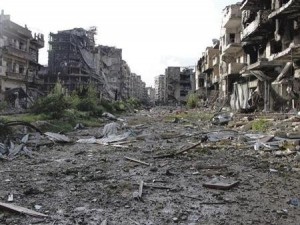 The focus of the battle has shifted to a strategic town on the border with Lebanon – al-Qusayr – which has been under rebel control for more than a year.

But in recent days, forces loyal to the Syrian government have made gains in their efforts to take it back. The objective of the Syrian army has been clear: cut off a supply route used by the opposition.

State television also showed pictures of its forces in control of Otaybah, a strategic town east of Damascus that lies on the approaches to the capital

General Safwat al-Zayyat, a military analyst told Al Jazeera: “We are seeing a new strategy. The regime knows they cannot regain control of lost territory in the north, northeast and south. So they are now concentrating the fight in Damascus and surrounding areas along with Homs all the way to the coast.”

Securing the coastal regions means the government needs to take control of al-Qusayr – the town is important because it is on a road linking the capital Damascus to the coast and now there are growing concerns that the fighting threatens to engulf neighbouring Lebanon.

The army has stepped up airstrikes in this strategic area – not only because it is a transit point for the opposition to send weapons and supplies into Syria but it lies on a highway that connects Damascus to the coast – a government stronghold.

The opposition says the battle for al-Qusayr is not being led by Syrian government forces but by Hezbollah – a Lebanese Shia group, an adamant supporter of the al-Assad regime.

Gains have become so significant that last year, when the Free Syria Army recaptured the town hall which had served as the main command center for Syrian troops in the area, they demolished it in order to prevent the Syrian government from recapturing it.

Also this week, accusations from both sides in Syria about the use of chemical weapons. Now the United States says it has intelligence to suggest the Syrian government may have been using them against rebels.

President Barack Obama says if there is strong enough evidence of chemical warfare in Syria, it could force a serious re-evaluation of the conflict.

Inside Syria with Hazem Sika speaks to guests Elias Hanna, a defence analyst and a retired Lebanese army general; Nicholas Heras, an author and Middle East analyst at Jamestown Foundation; Kamel Wazne, a political analyst and founder and director of the Center for American Strategic Studies in Beirut; and Saleh Mubarak, a member of the Syrian National Council and a professor at Qatar University.