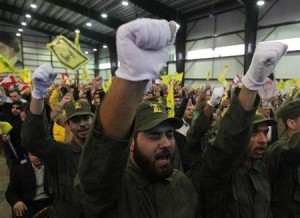 Fighters loyal to Hizbullah were killed on Saturday in battles near the Lebanese border around al-Qusayr, according to activists.

The Local Coordination Committees in Syria reported that six members of Hizbullah were killed in battles in Reef al-Qusayr in Homs.

The men according to al-Abdallah are: Haida Mohammed Ayyoub, Hussein Hassan Barakat, two men from al-Saleh family, a man from al-Salhab family and a member of Tleis family.

Hizbullah has announced several burials in past months, without elaborating on the circumstances of its members’ deaths.

The Syrian Observatory for Human Rights and the opposition say the army is backed by elite fighters from Hizbullah, a staunch backer of Assad’s regime.

Hizbullah’s involvement in Syria’s spiraling conflict has been condemned by the Syrian opposition, which views it as a “declaration of war,” and by the March 14 alliance in Lebanon.

Much of the heaviest fighting has raged near the Lebanese border around al-Qusayr.

Since it began in March 2011, Syria’s conflict has fueled local tensions between the communities in Lebanon, with bouts of street fighting and kidnappings.

Hizbullah had previously denied taking part in the civil war. But top Hizbullah official Nabil Qaouq said Monday that his group is “performing a national duty” toward Lebanese Shiites living in Syrian border towns and villages by supporting the “popular committees.”

The Local Coordination Committees in Syria said that the opposition rebels were killed in Saturday’s regime forces shelling on Homs.