Hezbollah accused of sending drone shot down by Israel 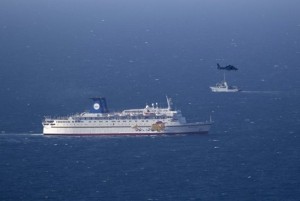 Israel shot down a drone Thursday as it approached the country’s northern coast, the military said. Suspicion immediately fell on the Hezbollah militant group in Lebanon. Hezbollah immediately denied it sent the craft via an announcement on the group’s media outlet, Al Manar TV, through a one line statement flashed as an urgent news bar on its screen.

Despite the denial, the incident was likely to raise already heightened tensions between Israel and Hezbollah, a bitter enemy that battled Israel to a stalemate during a monthlong war in 2006.

Officials said Netanyahu was informed of the unfolding incident as he was flying north for a cultural event with members of the country’s Druse minority. They said his helicopter briefly landed while the drone was intercepted before Netanyahu continued on his way.

“On my way here in the helicopter, I was told that there is an infiltration attempt of a drone inside the skies of Israel,” he said in the northern Arab-Israeli town of Daliyat al-Karmel. “We will continue to do everything necessary to safeguard the security of Israel’s citizens.”

Lebanon’s state-run National News Agency reported that Israeli warplanes flew over the Christian town of Jezzine and the highlands of the Iqlim al-Tuffah province, a Hezbollah stronghold in southern Lebanon, Thursday morning.

The Lebanese army also reported Israeli jets violated Lebanese air space on Tuesday and Wednesday. Israel has stepped up its flights over Lebanon amid fears that Hezbollah is taking advantage of the chaos caused by the Syrian civil war.

Lt. Col. Peter Lerner, a military spokesman, said the unmanned aircraft was detected as it was flying over Lebanon and tracked as it approached Israeli airspace.

Lerner said the military waited for the aircraft to enter Israeli airspace, confirmed it was “enemy,” and then an F-16 warplane shot it down.

The drone was flying at an altitude of about 6,000 feet (1,800 metres) and was downed roughly five miles (eight kilometres) off the Israeli coast near the northern city of Haifa. Lerner said Israeli naval forces were searching for the remains of the aircraft.

He said it still was not clear who sent the drone, noting it flew over Lebanese airspace, but that it could have originated from somewhere else.

Other military officials, speaking on condition of anonymity because they were not permitted to talk to the media, said they believed it was an Iranian-manufactured aircraft sent by Hezbollah. The Lebanese group sent a drone into Israeli airspace last October that Israel also shot down.

Netanyahu repeatedly has warned that Hezbollah might try to take advantage of the instability in neighbouring Syria, a key Hezbollah ally, to obtain what he calls game-changing weapons.

Israel has all but confirmed that it carried out an airstrike in Syria early this year that destroyed a shipment of sophisticated anti-aircraft missiles bound for Hezbollah.

A senior Lebanese security official, who also spoke on condition of anonymity in line with regulations, said Lebanon had no information on Thursday’s incident.

Hezbollah spokesman Ibrahim Moussawi also said he had no information, adding the group would put out a statement if it had something to say on the issue.

When Israeli military shot down a Hezbollah drone on Oct. 6, it took days for Hezbollah leader Sheik Hassan Nasrallah to confirm it in a speech. He warned at the time that it would not be the last such operation by the group. He said the sophisticated aircraft was made in Iran and assembled by Hezbollah.