by yalibnan
1243
By Nicholas Blanford Rebels fighting the Syrian government are shelling villages on the Lebanese side of the border in order to curb Hezbollah's efforts to help the Syrian regime.
Share:

Rebels fighting the Syrian government are shelling villages on the Lebanese side of the border in order to curb Hezbollah’s efforts to help the Syrian regime.

Residents of of Hermel girded for revenge Sunday after a surge of rocket attacks by Syrian opposition rebels against this Shiite-populated town and adjacent areas in Lebanon’s northern Bekaa Valley.

The increase in rocket fire over the past week comes amid heavy clashes in Syria between the Syrian Army and mainly Sunni rebel fighters opposed to President Bashar al-Assad’s regime. The rebels are fighting to retain control of a string of villages located west of Qusayr, a strategically-placed Sunni-populated town five miles north of the border with Lebanon that lies in rebel hands.

Qusayr lies close to the key highway that links Damascus to the coastal city of Tartous and passes through Homs, Syria’s third largest city. If the Syrian army is able to recapture Qusayr, it will strengthen the regime’s grip on the highway and sever the logistical supply chain between opposition-supporting areas of Lebanon and Homs.

On the southern edge of Hermel, a group of youths scrambled over a rocky mound and craned their necks to gaze across scattered houses and scrubland to the north. Anxious motorists paused to ask bystanders what was happening.

“Another rocket has just struck somewhere nearby,” said a young man standing on the side of the street gazing as other residents hurried indoors. 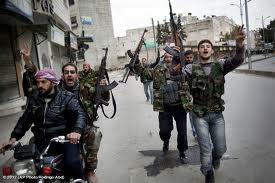 The rebel Free Syrian Army accuses the Lebanese Shiite militant group Hezbollah of fighting alongside Syrian Army troops and has vowed to escalate its attacks against Hezbollah in Lebanon’s northern Bekaa Valley. The Voice of Lebanon Radio reported Sunday that Jabhat al-Nusra, the Al-Qaeda-affiliated rebel faction, has warned that it will attack Hezbollah throughout Lebanon, including the party’s stronghold in the southern suburbs of Beirut.

The Syrian opposition National Coalition Sunday urged Hezbollah to immediately withdraw from Syria, warning that the group’s involvement in Syria’s conflict “could drag Lebanon and the region into an open-ended conflict with disastrous consequences.”

“The Coalition calls on the Lebanese government … to take all the necessary measures to put a stop to the actions of Hezbollah, which is flagrantly involved [in the conflict] on the side of the Assad regime,” the statement added. The situation in the border area could “explode,” said the group, while calling on rebel FSA brigades in Homs province “to show restraint and to respect Lebanon’s sovereign borders out of keenness on the safety of civilians.”

But the local Shiite residents of Hermel and the northern Bekaa, almost all of whom are staunch supporters of Hezbollah, warn that they will not allow the FSA to shell their homes at will.

“They [the FSA] are trying to start a Sunni-Shiite war. But we are pulling ourselves back right now because we don’t want to be dragged into a conflict. But the people here are ready to cross the border right now and kill the people who are firing at us,” says Ali Nasreddine, a local businessman from Hermel.

The FSA first fired into Shiite-populated areas of the northern Bekaa on Feb. 16, when two homemade rockets hit the border village of Qasr but failed to explode. In the past week, however, there has been a significant escalation in the number of rocket and mortar attacks against the area.

On April 14, a resident of Qasr and a teenager in nearby Hawsh Sayyed Ali were killed. Since then, rockets have struck the area on a near daily basis. On Saturday, Hermel, 10 miles south of the border, was hit for the first time, signaling an expansion of the border shelling. A second rocket hit close to a hospital in Hermel around noon Sunday.

Mr. Nasreddine, who lives only a few minutes drive from the border, says that the fighting around Qusayr in recent days is the heaviest he has heard since the uprising against the Assad regime began more than two years ago. As he spoke in the courtyard of his home, a Syrian air force jet whispered through the clouds to the north, followed seconds later by the rumble of a large explosion, suggesting another air strike against rebel-held villages near Qusayr. More distant explosions were followed by the sharper report of two closer blasts just across the border.

“It has been like this all week. It looks like they are getting ready for an attack on Qusayr,” he says, voicing the views of most people in the area.

Syrian opposition activists said the fighting has focussed on the villages of Radwaniyah, Burhaniyah, and Tel Nabi Mindo, all of which lie just west of Qusayr and have reportedly been captured by Syrian troops. Tel Nabi Mindo has a long history of conflict. It is the modern-day site of Kadesh where in 1274BC the rival Egyptian and Hittite empires fought one of recorded history’s earliest battles. The pro-Syrian regime newspaper, Al-Watan, said that the Army had gained control over the villages around Qusayr.

“There is a big change in the army’s tactics. It has become more precise in securing its objectives,” the newspaper said.

However, Syrian opposition activists claimed that the army was only able to capture the villages with the assistance of Hezbollah fighters.

“The only reason why the regime is advancing on Qusayr area is because of Hezbollah’s troops,” Qusayr-based activist Hadi al-Abdullah told Agence France Presse. “Hezbollah fighters advance on the ground while the [Syrian] air force gives them cover.”

Hezbollah denies accusations that it has sent fighters into Syria to help Assad crush the rebellion. But the group has conceded that some members of Hezbollah who live in several Lebanese Shiite villages just inside Syria are fighting to defend their homes from attack by Syrian rebels.

In recent months Hezbollah has held a number of funerals for dead fighters, killed while “performing their jihadi duty” in otherwise unexplained circumstances. It has become common knowledge in Shiite circles in Lebanon that Hezbollah fighters are operating in some regions of Syria, particularly Damascus and the villages around Qusayr.

The Syrian rebels accuse Hezbollah of firing rockets from Hawsh Sayyed Ali, a narrow, wooded finger of territory poking into Syria, and say that their own attacks are aimed at military positions belonging to the Shiite group. However, the rockets have struck civilian areas, including a mosque and homes, or impacted in open land. Videos uploaded to YouTube that show the rebel units launching 107mm rockets and 120mm mortars toward Lebanon suggest that little attention is paid to accurate firing. Many of the rounds have even failed to explode.

“Qasr has just been hit by five rockets just a few minutes ago. Thank God none of them exploded,” says a furious-looking local official from Qasr standing on the side of the road who only gave his family name, Jaafar. SUVs, marked as Hezbollah vehicles by their lack of license plates and tinted windows, thundered up and down the road.

“There is no government here,” Mr. Jaafar says. “We will have to defend ourselves.”

Michel Suleiman, the Lebanese president, said that the FSA’s targeting of Lebanese border towns “does not achieve demands related to democracy, particularly that Lebanon is already burdened with what it can’t bear, which is hosting Syrians and sheltering them.”

Some 420,000 Syrians have registered or are awaiting registration with the United Nations as refugees in Lebanon.

Local MPs in the Bekaa Valley have called upon the government to halt the rebel attacks.

“The state should put an end to the continued Syrian attacks on Lebanon. The residents of the border villages have the right to defend themselves,” said Ghazi Zeaiter, a lawmaker from the Bekaa region.

But the Lebanese state has little influence or presence in this remote region, where the fiercely independent local population tends to live by stringent tribal traditions. There is no visible Lebanese army presence north of Hermel, and even if troops were deployed along the border it is unlikely that they would be able to halt a conflict that is not only turning increasingly sectarian between Sunnis and Shiites but also appears to be spiraling out of control.