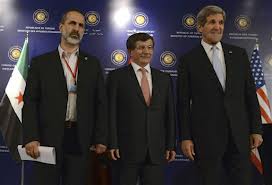 In a marathon meeting in Istanbul including Kerry, Turkish Foreign Minister Ahmet Davutoglu and Syrian Opposition Coalition President Moaz al-Khatib, the three concluded a commitment “to a pluralistic Syria, to a Syria in which every minority has minority rights protected.”

In order to accomplish that goal, Kerry announced a pact to funnel military aid through a coalition of moderate opposition forces — with the hope the new funds will strengthen moderates against radical Islamist elements within the broad coalition fighting for Assad’s ouster, the Wall Street Journal said Sunday.

U.S. aid to Syria’s rebel forces has been doubled to $250 million, he said.

The hope, Kerry said, is to allow moderate forces to gain the upper hand once Assad is gone and eventually create a democratic state in Syria.

U.S. diplomats, along with other Western partners, have sought to create a moderate-led transition government capable of taking over security operations and humanitarian aid once the Assad regime falls.

“We want to see the coalition lead the way by ramping up its ability in order to be able to provide assistance, deliver services, and respond to the needs of the Syrian people,” Kerry said.

The U.S. aid would be funneled to Syria through opposition Gen. Salim Idris, who, Kerry said, “could not have been clearer about his determination to separate what he and the opposition are doing from what some of the radical and extreme elements are doing.”