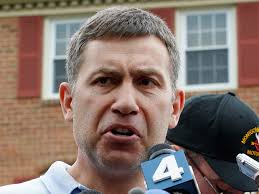 The uncle of the Boston Marathon bombing suspects told TODAY Saturday that he believes Dzhokar and Tamerlan Tsarnaev were pawns in a deadly scheme.

“I strongly believe they were just puppets and executors of something of bigger scale,” Ruslan Tsarni told Savannah Guthrie.

Tsarni, a Maryland resident who is the brother of the suspects’ father, believes Tamerlan, 26, who died in a confrontation with police early Friday morning, was radicalized by others. He noted that the suspects were in his house as children, and recalled a surprising transformation the last time he saw Tamerlan in 2009.

“There certainly were mentors,’’ Tsarni said. “I was shocked when I heard his words, his phrases, when every other word he starts sticking in words of God. I question what he’s doing for work, (and) he claimed he would just put everything in the will of God. It was a big concern to me. He called me ‘confused’ when I started explaining to him, make yourself useful to yourself and to your family and maybe you’ll have extra to share with everybody else.

“It wasn’t devotion, it was something, as it’s called, being radicalized. Not understanding what he is talking (about). He is just using words for the sake of the words and not understanding the meaning of it.’’

The suspects’ parents told NBC News they believe their sons were framed. Tsarni said a family acquaintance told him there was an outside influence on Tamerlan.

“He said there is someone who brainwashed him, some new convert to Islam,’’ Tsarni said. “I would like to stress (the acquaintance was) of Armenian descent.’’

The suspects’ uncle believes the radicalization occurred in the United States, not overseas. Tamerlan Tsarnaev traveled to Russia last year.

Tsarni said he was “angry” on Friday when he told reporters outside his home the brothers were “losers.” On Saturday, he told Guthrie he was grateful that Dzhokar was captured alive after the manhunt that concluded Friday night in Watertown, Mass. Tsarni also expressed his condolences to the families of the three people killed in the marathon bombing and the college police officer who was allegedly shot and killed in his cruiser by the suspects on Thursday night.

Dzhokar was found wounded inside a boat in the backyard of a house and captured after a gun battle.

“I was relieved that he is alive,’’ Tsarni said. “At least he has a chance to ask for forgiveness for those that he victimized, as well as there is a chance now for enforcement agencies to get to the bottom of it.

“For a 19-year-old kid, I do not even believe (that) he would (have) been in full comprehension of what he’s been doing. For the sake of seeking forgiveness for himself, I don’t know how long his life is going to be, but I know it will be way easier for him if he receives that forgiveness for those he made to suffer.”