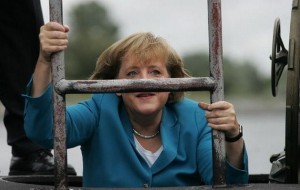 A presidential statement said that Merkel also expressed support to Lebanon’s call for a U.N.-led international conference to discuss the issue of Syrian refugees.

Their talks focused on bilateral relations, it said.

Lebanon’s envoy to the U.N. Nawwaf Salam warned on Thursday that the number of Syrians in Lebanon could reach 1.2 million by the end of 2013.

“We have the right to ask for dividing the burden as Lebanon is the smallest country and has the least of potentials but hosts the largest number of refugees,” he added.

The Security Council has been stalemated for months on Syria. Western and Arab nations blame the conflict on President Bashar Assad’s government. Russia insists on assigning equal blame to the Syrian rebel opposition, and has cast vetoes, along with China, to block draft council resolutions.