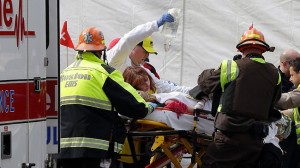 AUTHORITIES may have an image of a suspect carrying, and perhaps dropping, a black bag at the second bombing scene, the Boston Globe has tweeted.

CNN also reports that Boston authorities believe they have identified a suspect, gathered from department store Lord & Taylor CCTV footage near the site of the second blast. TV footage from a local Boston station was also used to help make the ID, sources said.

Ahead of an emotional visit to the city by US President Barack Obama to honour the three dead and 180 injured, detectives are concentrating their effort on the two bombs that caused the carnage at the marathon finish line on Monday.

With no claim of responsibility made for the attack, the Federal Bureau of Investigation (FBI) said it has launched a “worldwide” hunt for the attackers.

It has released photographs of the mangled metal remnants of a pressure cooker believed to have been used for one of the bombs which sprayed nails, ball bearings and metal pellets into the huge crowds.

The lid of one pressure cooker was found on the roof of a hotel near the bombs, the hotel’s owner said.

Shreds of black nylon bags believed to have been used to carry the bombs have also been found.

Doctors at hospitals where the critically injured were taken say ball bearings and nails taken from patients were being used in the investigation.

George Velmahos, Massachusetts General Hospital’s chief of trauma surgery, said the metal was being handed over to police. He said 12 nails were taken from inside one patient.

Peter Burke, chief trauma surgeon at Boston Medical Centre, also said the metal pieces was being kept aside for the police. He said some of the nails were about five centimetres long.

Evidence is being collected for analysis at the FBI’s main laboratory in Quantico, Virginia.

Similar, easy-to-make devices are used as roadside bombs in Afghanistan and Iraq, but have also been used by domestic extremists in the United States.

US authorities have thrown virtually every investigation agency into the hunt with more than 1000 officers working in Boston alone, said Rick DesLauriers, head of the FBI’s Boston office.

Mr DesLauriers said Tuesday the investigation was “in its infancy” in a veiled warning that authorities expected a prolonged operation.

Mr Obama has condemned the attack as “an act of terror” and vowed that the attackers “will feel the full weight of justice.”

He will attend a special inter-faith service for the victims at Boston’s Cathedral of the Holy Cross on Thursday morning.

About 100 of the injured have already left Boston hospitals but many remain in critical condition and the city has started emotional tributes to the dead, who include an eight-year-old boy Martin Richard, a Chinese graduate student at Boston University and restaurant manager Krystle Campbell.

About 1000 people attended a candlelight vigil in a park near the boy’s home on Tuesday night and hundreds went to other events in Boston.

The Chinese student has not officially been named, but Chinese websites have named her as Lu Lingzi.

Hundreds of students attended a memorial service for the woman at Boston University on Tuesday night. Thousands of tributes were posted online on Chinese websites.

A pair of running shoes, flowers and a key chain were left in front of the university memorial to Martin Luther King junior for the Chinese student.

Theology student Meghan Nelson, who placed the tributes, said: “All the theology school students are wearing running shoes this week. It symbolises standing together for unity and running for peace. It’s about solidarity.”

Investigators trying to determine if the attack was a homegrown act or the work of foreign terrorists are still scouring the twin blast sites near the marathon finish line.

“This will be a worldwide investigation. We will go to the ends of the Earth to identify the subject or subjects responsible for this despicable crime,” Mr Delauriers said ealier.

“Someone knows who did this,” Mr DesLauriers said. “Importantly, the person who did this is someone’s friend, neighbour, co-worker or relative.”

More than 6000 videos and images of the scene have reached authorities, including one image showing a man in black shredded clothes moving away from the blast site.

Authorities appear to have no suspects after raiding the home of a Saudi student who they said was a witness, not a suspect.