Tammam Salam who was appointed by President Michel Suleiman as Lebanon’s PM-designate after receiving 124 votes in the two-day Baabda parliamentary consultations started today his own consultations with the various parliamentary blocs on the cabinet formation.

Salam kicked off the consultations with a meeting with Speaker Nabih Berri at the parliament. He later held talks with Caretaker PM Najib Mikati, who said following the meeting that he called for the formation of a government whose main purpose will be to hold the elections.

The PM-designate then held separate talks with deputy Speaker Farid Makari who said after the meeting: “I did not make specific demands over the shape of the new government, but I hope that Salam would break the sectarian distribution in the major cabinet portfolios.”

“I also expressed hope that certain portfolios would not granted to political powers, but would be instead handed over to competent individuals who are specialized in that specific field ,” he told reporters at parliament in other words technocrats and not politicians. 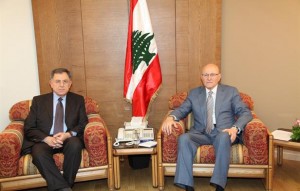 The Future Movement Parlaimentary bloc delegation was headed by its leader former PM Fouad Siniora who said after meeting Salam : “We wish him success in his mission to form a new government, which we hope will be capable of working as a united group and tackling the people’s concerns.”

“The new cabinet should be capable of implementing democracy and the rotation of power of all portfolios, starting with the Finance Ministry,” Sinora , while stressing that the members of the new government should not run in the parliamentary elections.

“We hope all sides would grant Salam their confidence in order for a cabinet to be formed as soon as possible to ensure the rise of Lebanon on the political and economic levels and in order to stage the elections,” Siniora said. 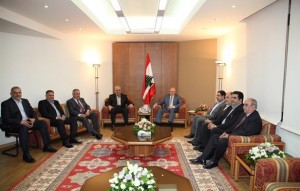 Hezbollah’s Parliamentary bloc leader MP Mohammad Raad told Salam that his party wants the new cabinet to be a political one.

“We asked of [Salam] that the cabinet be political [and] oversee the [parliamentary] elections,” Raad said following the meeting with Salam on Tuesday.

He also called on the newly appointed PM-designate to have political parties represented in the cabinet in proportion to their size in the parliament. 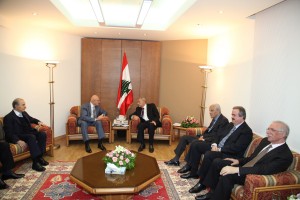 An MP from Berri’s Parliamentary bloc said in a statement following the meeting that there was an “optimistic ambience,” and voiced hoped that “this [optimism] would directly reflected in the formation process.” The MP did not reveal Amal conditions ( if any ) for participation in the cabinet. 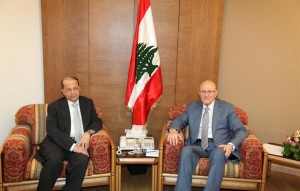 Change and Reform Parliamentary bloc delegation which was headed by its leader MP Michel Aoun said that he and his party will not hinder the work of the newly appointed Prime Minister-designate .

“The bloc refuses to put obstacles in Salam’s way,” Aoun said on Tuesday following his meeting with the PM-designate

Aoun refrained from revealing the issues his bloc discussed with Salam, but announced that the Free Patriotic Movement requested that the new government be a national reconciliation cabinet.

Aoun used the occasion to attack the Future Movement , which was the first bloc that met with Salam today. 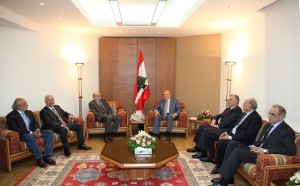 The Progressive Socialist Party Parliamentary bloc delegation announced that its leader MP Walid Jumblatt told the PM-designate that his party has no pre-conditions for a new government.

“We have no pre-conditions,” Jumblatt said after meeting with Salam, adding that he would facilitate Salam’s “tasks in all fields.” 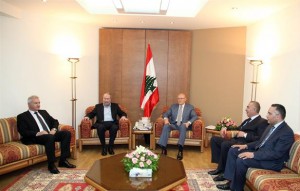 The Lebanese Forces bloc delegation which was headed by MP Elie Keyrouz told Salam that their bloc prefers a neutral cabinet of technocrats.

“[We want] a neutral and technocratic government, one whose members will not be candidates in the upcoming [parliamentary] elections,” MP Keyrouz said on Tuesday following the consultations with Salam.

The LF official noted that the new cabinet’s role is to prepare and supervise the upcoming elections.

Keyrouz also stressed the importance of the new ministerial statement adhering to the Baabda Declaration, which calls for Lebanon to keep away from regional and international conflicts.

He went on to say that allowing Hezbollah to maintain its arsenal “is unconstitutional.”

“The decision to make both war and peace must be placed in the hands of the Lebanese state.” He stressed 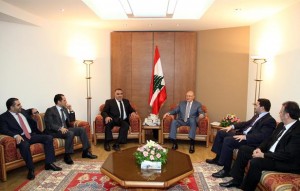 The Phalange Party bloc delegation which was headed by MP Elie Marouni expressed its readiness to participate in a technocratic cabinet.

“If the government is technocratic, the Phalange Party has many non-political specialists,” MP Marouni said on Tuesday after a meeting with Salam.

The delegation also requested Salam to look into controlling the Lebanese-Syrian borders and put an end to the violations of the Lebanese sovereignty, after numerous incursions into Lebanese territory were conducted by Syrian troops during the past several months.

No changes in ministerial statement 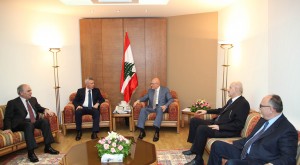 Marada Movement Parliamentary bloc delegation which was headed by its leader MP Suleiman Franjieh called on Salam not to change the ministerial declaration that was used by the outgoing cabinet .

“We insist that the government’s statement must not differ in any shape or form from the former [ministerial] statement,” Franjieh said on Tuesday after a delegation from his bloc met with Salam.

The Marada chief who boycotted the presidential consultation at Baabda Palace called for the formation of a government of national reconciliation, stressing that the new cabinet must “represent all [of the parties].”

Hezbollah’s weapons remain a critical issue that now faces the formation of the new cabinet.

The Hezbollah led March 8 alliance which includes Marada Movement – wants the formula of the unity of the Lebanese people, army and Resistance to be included in the next government’s ministerial statement, while the parties affiliated with the March 14 coalition have called for the omission of the clause and using the Baabda declaration instead.

The Zahle bloc, said after meeting with Salam that the new government should include a figure from the Bekaa city and that it should be comprised of individuals who are specialized in their fields.

MP Talal Arslan said after meeting with Salam “we stressed the need to form a national unity government that would be a salvation government and works for Lebanon’s interest.”

He said he will not personally demand a ministerial portfolio, but noted that his bloc has the right to be represented.

“I’m against permanently allocating any ministerial portfolio to a certain sect,” Arslan stressed.

Salam announced last Sunday that the new government will be known as the “National Interest Cabinet”, adding that he seeks to form a council of ministers whose members are not nominated for the parliamentary elections.