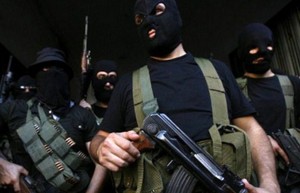 A spate of tit-for-tat kidnappings in the northern Bekaa Valley has drawn fears of a sectarian conflict breaking out in an area where the Lebanese state carries little weight and tribal law prevails.

The mutual kidnappings could not have come at a worse time for Lebanon – following the recent resignation of the government, a growth in general lawlessness, and rising concerns that the country is being sucked ever deeper into Syria’s civil war.

Aside from establishing two new Lebanese army checkpoints on main roads in the northern Bekaa, the Lebanese authorities have distanced themselves from the kidnapping dispute despite the dangers of escalation – accepting, perhaps, the limits of Beirut’s authority here.

Hussein Jaafar, a Shiite truck driver from Qasr who earns a living smuggling diesel fuel across the Lebanon-Syria border, was abducted on March 23 in the area of Arsal, a remote Sunni-populated town tucked into rugged mountains near Lebanon’s northeast border with Syria.

The kidnappers’ identity is still unknown. Arsal residents say that Mr. Jaafar has been taken to Yabroud in Syria and they are seeking a way to release him to his family. The kidnappers are demanding $1 million for his release.

But the Jaafar clan, a fiercely independent Shiite tribe that follows a long tradition of honor and revenge, refused to pay the ransom and instead embarked on a retaliatory kidnapping spree, abducting more than a dozen residents of Arsal. Some of the hostages were released in a gesture of goodwill, leaving six men in the Jaafar’s hands.

Hassan Rayyed, whose son Hussein was kidnapped by the Jaafars a week ago, buried his head into his hands and sobbed as he sat on the stone steps outside his home in Arsal.

“I don’t know who took the Jaafar boy but I am scared that they will kill him. If they kill him, the Jaafars will kill my son in revenge,” he says, his eyes red with tears.

His wife, Khawla, stood above her husband and, trembling with rage, cursed the Jaafars.

“They are nothing but hashish growers and cocaine dealers. If they kill our son, we will kill them all,” she says.

Ali Hujeiri, the mayor of Arsal, says that relations with the Jaafar tribe traditionally have been respectful and cordial. But he warns that the Jaafars made a mistake by punishing the residents of Arsal for Hussein Jaafar’s kidnapping.

“I want to advise [the Jaafars] that right now I am the only one stopping the people here from escalating the situation further,” he says. “The Jaafars should understand that it is easy to pull a trigger, but not so easy to stop a war.”

The Jaafars say they have already reassured their hostages – or “guests” as they prefer to describe them – that they will not be harmed regardless of what happens to Hussein Jaafar.

“Even if Hussein is killed, we will not kill the hostages. It’s not a sectarian issue, it’s tribal honor,” says a prominent member of the Jaafar family who requested that his first name not be identified as he is wanted by the Lebanese authorities. Lying on the floor within easy reach was an M16 rifle fitted with a grenade launcher and a light machine gun with belts of ammunition coiled around it.

Hussein Jaafar’s immediate family live on the western outskirts of the dusty border town of Qasr, 20 miles north of Arsal at the foot of soaring mountains studded with scrub oak and juniper trees.

“We have no reason to fight the people of Arsal, and they should not make a reason to fight with us or they will be crushed. We need to resolve this,” says Mehdi Jaafar, Hussein’s brother.

An already tense situation is further aggravated by the fact that the Jaafars and the residents of Arsal back opposing sides in Syria’s civil war. Arsal is a nexus of support for the Syrian rebels and some residents have joined the armed opposition. Meanwhile, many Jaafars are members of the Lebanese Shiite militant group Hezbollah and also are fighting in some areas of Syria in defense of the Assad regime.

So far, they have confined their battles to Syrian territory. But the tit-for-tat kidnappings risks dragging the conflict into the northern Bekaa.

As the Jaafar family aired their grievances, loud explosions rolled across the landscape from a few miles inside Syria, where a Syrian air force jet bombed rebel positions. The routine thump of explosions and crackle of machine gun fire is an ever-present reminder for the northern Bekaa of the perilous proximity of Syria’s war to Lebanon.