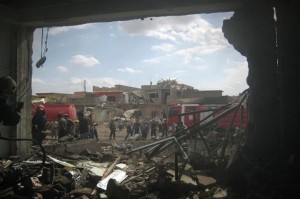 A suicide bomber drove an oil tanker packed with explosives into a local Iraqi government compound on Monday, killing at least nine people, mostly policemen, in the northern city of Tikrit.

No group immediately claimed responsibility for the attack, but Sunni Muslim insurgents tied to al Qaeda have been redoubling their efforts to weaken Iraq’s Shi’ite-led government and stoke inter-communal conflict.

The bomber drove the tanker inside a compound housing governmental administration offices in central Tikrit, 150 km (95 miles) north of Baghdad, setting off a blast that left behind a large crater and badly damaged nearby buildings.

The blast in Tikrit, once of the home of executed former president Saddam Hussein, killed at least nine people, including seven police officers, local officials said.

Initial accounts reported the truck had been abandoned at the site. Police at the scene said compound guards may not have suspected the tanker because fuel trucks arrive every morning to deliver gas and oil to the government offices.

“The tank was stopped just behind the police administration building and partially damaged it. I was injured in my face and stomach by glass,” police captain Mohammed Salih said.

Suicide bomb attacks have been on the rise since the beginning of the year as the Syrian war next-door exacerbates Iraq’s own security situation by giving a boost to the local wing of al Qaeda, Islamic State of Iraq or ISI.

Intensifying violence has been accompanied by political crisis in Iraq where a power-sharing government among Shi’ite, Sunni and ethnic Kurdish blocks has been all but paralyzed since U.S. troops left more than a year ago.

Prime Minister Nuri al-Maliki, a Shi’ite, has also been facing months of protests in the Sunni heartland, which shares a border with Syria. Many Iraqi Sunnis feel their minority sect has been sidelined by Maliki’s government.