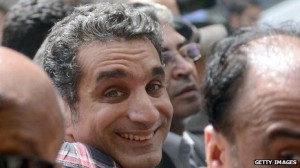 The popular Egyptian satirist Bassem Youssef has been released on bail, after questioning by prosecutors over allegations he insulted Islam and President Mohammed Morsi.

Mr Youssef had spent five hours at the public prosecutor’s office, a day after a warrant was issued for his arrest.

He has faced several complaints over his show El Bernameg (The Programme), which satirises many public figures.

On his Twitter feed, Mr Youssef said the bail conditions were related to three lawsuits, while a fourth was still being investigated.

The case has highlighted worries about press freedoms in Egypt.

At one point during his arrival at the prosecutor’s office Mr Youssef donned an oversized academic hat, mocking one which Mr Morsi wore recently when he received an honorary doctorate in Pakistan.

In a statement sent out on his Twitter account as he arrived, he said that lawyers and policemen at the office wanted their picture taken with him, and joked that this was perhaps the real reason for his summons.

However, the al-Misri al-Yawm news portal reported that the judge asked him to remove this and other tweets written during the questioning.

Bassem Youssef is a doctor who shot to fame after winning a large number of followers with his witty lampooning of public figures in amateur videos posted on the internet following the uprising that ended Hosni Mubarak’s rule in February 2011.

He became a household name when his satirical show – likened to Jon Stewart’s The Daily Show in the US – began to be broadcast three times a week on one of Egypt’s independent satellite stations.

But sketches in which he portrayed Mr Morsi as a pharaoh, calling him “Super Morsi” for holding on to executive and legislative powers, and, separately, putting the president’s image on a pillow and parodying his speeches angered one Islamist lawyer, whose formal complaint resulted in the investigation.

As well as insulting Mr Morsi and Islam, Mr Youssef is also accused of “spreading false news with the aim of disrupting public order”.

Mr Youssef’s case is also seen as the latest in a string of prosecution actions against opponents of the president and the movement that supports him, the Muslim Brotherhood.

Earlier this week, Egypt’s top prosecutor ordered the arrest of five political activists, among them a leading blogger, on suspicion of inciting aggression against the Brotherhood.

Many journalists have criticised the Islamist-backed constitution which came into force earlier this year, arguing it does not offer enough guarantees for a free media.

The constitution also sparked protests from opponents who say it favours Islamists and does not sufficiently protect the rights of women or Christians.