Jordan gets smallest cabinet to date 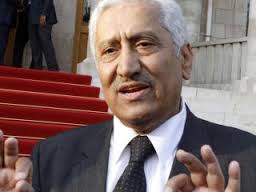 Prime Minister Abdullah Ensour and his Cabinet were sworn in Saturday before His Majesty King Abdullah, becoming the 77th government in the country’s history and the 13th since the King ascended the Throne.

Besides Ensour, the Cabinet consists of 18 ministers.

Four ministers only kept their portfolios from the outgoing government that include Foreign Minister Nasser Judeh, Minister of Industry and Trade and Minister of Information and Communications Technology Hatem Halawani, Minister of Public Sector Development Khleif Al Khawaldeh and Labour Minister Nidal Qatamin, who is in addition to his post was tasked with the portfolio of Transport Ministry.

Among the newcomers are Public Security Department Director Hussein Majali who was tipped to become interior minister, economist and researcher Ibrahim Saif for the planning ministry and women’s rights activist Reem Abu Hassan as minister of social development, who is the only woman in the new government.

Ibrahim Saif: Minister of Planning and International Cooperation and Minister of Tourism and Antiquities

Mohammad Momani: Minister of State for Media Affairs and Communications and Minister of Political Development and Parliamentary Affairs