HRW: Syrians need more than empty words from the BRICS 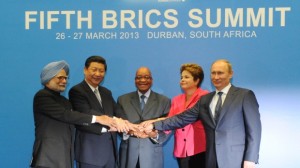 Human Rights Watch (HRW) blasted on Wednesday the BRICS leaders over their lack of of concern for the Syrian people. ” Syrians need more than empty words from the BRICS countries. Rather than just call for an end to violence, it is time for BRICS states to make clear that the punishment of the civilian population must stop”, Peggy Hicks, global advocacy director at Human Rights Watch said in response to the concern the BRICS leaders expresse over the violence in Syria and Iran.

HRW issued the following press release on Wednesday criticizing the BRICS countries who are holding their fifth summit in Durban , South Africa.

The BRICS countries should call for an end to indiscriminate attacks on civilians and civilian-populated areas in Syria, and insist that cluster munitions and incendiary weapons should not be used. Brazil, Russia, India, China, and South Africa are meeting in Durban for the annual BRICS summit on March 26 and 27, 2013.

When BRICS countries met in New Delhi in 2012, they called for “an immediate end to all violence and violations of human rights” in Syria. In Durban, BRICS should move beyond that general but ineffective pronouncement and call for specific actions to address the unfolding tragedy on the ground in Syria. In particular, BRICS should call for an immediate end to indiscriminate attacks on civilians and civilian-populated areas, including by ballistic missiles, to the unlawful use of cluster munitions and incendiary weapons, and tosummary executions, enforced disappearances, and torture of those detained.

“Syrians need more than empty words from the BRICS countries,” said Peggy Hicks, global advocacy director at Human Rights Watch. “Rather than just call for an end to violence, it is time for BRICS states to make clear that the punishment of the civilian population must stop.”

BRICS countries should also call for Syria’s government to allow humanitarian aid to be brought into the country across all of its borders, including from Turkey.

Since the BRICS countries expressed “deep concern” at the situation in Syria at the summit meeting a year ago, the death toll in the Syrian conflict has increased from 9,000 to more than 70,000. On March 19, the UN High Commissioner for Refugees António Guterres described the humanitarian situation in Syria as “dramatic beyond description,” and said that more than 3.6 million people have been displaced within the country. The UN Office for the Coordination of Humanitarian Affairs (OCHA) on January 29 called urgently for agreement to allow cross-border transfers, noting that “there is no time to lose.”

“BRICS countries may not see eye-to-eye on the Syria crisis as a whole, but surely they can agree that the UN should be able to reach those in need through the quickest and easiest route,” Hicks said. “BRICS countries should make it their mission to convince President Bashar al-Assad to agree to open all of Syria’s borders to aid deliveries, including the border with Turkey.”

Syria has permitted some “cross-line” aid deliveries that originate in Damascus and then are taken to opposition-held areas, but it has not agreed that humanitarian assistance may be sent to opposition areas directly from neighboring countries. While independent organizations are delivering some aid from Turkey to northern Syria, under a UN General Assembly resolution, UN agencies are not allowed to work across borders without Syria’s consent unless the UN Security Council authorizes such efforts. UN involvement in the cross-border deliveries would help ensure a more effective and coordinated aid effort, humanitarian officials have said.

The UN announced on March 25 that it is temporarily relocating some of its staff out of Syria after mortar shells fell near the Damascus hotel housing UN staff. The UN will maintain staff to continue operating its critical humanitarian programs, its spokesperson said. The insecurity in Damascus underscores the importance of opening Syria’s borders to facilitate humanitarian access to reach all those in need.

Humanitarian aid to opposition-held areas is also undermined by the multiplicity of armed groups and the absence of security guarantees. The Syrian National Council should encourage armed opposition groups to grant safe passage to relief convoys and personnel into the territories under their control.

Two years into the Syrian conflict, international monitors still do not have access to all those detained in Syria, by both the government and the opposition. BRICS countries should also call on both the Syrian government and opposition groups to give international monitors unimpeded access to all those detained, whether in official or unofficial places of detention, and should support the release of all peaceful activists from detention as well.

India, Brazil, and South Africa should also push at the Durban summit for their BRICS partner, Russia, to suspend all military sales and assistance to the Syrian government.