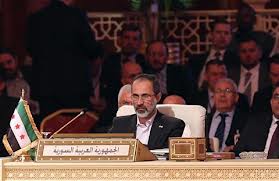 Syria‘s opposition is stepping up efforts to win western and international support after being formally granted the country’s representation in the Arab League, whose Doha summit on Tuesday heard an impassioned plea for help in the struggle against Bashar al-Assad.

Moaz al-Khatib, who on Sunday announced his resignation as leader of the Syrian opposition coalition, took to the podium in the Qatari capital to blame Assad for the continuing bloodshed in a “struggle between freedom and slavery, justice and tyranny” and reveal that he was awaiting an answer from the US about his call to use Patriot missiles in Turkey to protect civilians from the regime’s air power.

“We are still waiting for a decision from Nato to protect people’s lives, not to fight but to protect lives,” Khatib said. But a Nato spokesman said the alliance did not intend to get involved.

Opposition officials also said they expected Britain and France to make good on pledges to supply weapons to the Free Syrian Army – the main opposition fighting formation – if other EU member states insisted on maintaining their arms embargo. The coalition would also be seeking to take over the Syrian seat at the UN, despite certain opposition from Russia and China, the officials said.

Khatib, a respected former imam of the Umayyad mosque in Damascus, made no mention of his resignation in his statesmanlike and widely praised summit speech that focused on the right of the Syrian people to determine their own future free of external meddling.

“I convey to you the greetings of the orphans, widows, the wounded, the detained and the homeless,” he told the gathering at a glittering conference centre in Doha. Syrians, the only people in the world whose bakeries were bombed by fighter jets, had paid “a bloody price” in their struggle for freedom.

Aides said Khatib was likely to withdraw his resignation in exchange for widening the coalition to include more women, more members of Assad’s Alawite community and other minorities, and more people inside Syria, which would weaken the power of the Muslim Brotherhood relative to other groups.

The emir of Qatar, Sheikh Hamad bin Khalifa al-Thani, who ceremonially welcomed Khatib to underline the historic move, said the summit should reflect the aspirations of the Arab spring. Khatib went further, calling on governments to “break a link of repression” by unconditionally releasing all political detainees to fulfil those hopes.

Algeria, Iraq and Lebanon had opposed the decision to give the opposition the vacant Syrian seat. Syria, a founder member of the 22-member league, was formally suspended several months after the outbreak of the 2011 uprising, which has cost an estimated 70,000 dead.

Khatib expressed full confidence in Ghassan Hitto, a US-based IT executive who was chosen as prime minister of a Syrian transitional government and was widely seen as the candidate of Qatar and the Muslim Brotherhood, which the Gulf state has supported across the Arab world, as has the Qatar-based Al-Jazeera TV. Opposition officials said they hoped Hitto would consolidate a governing presence on the ground in liberated areas of Syria while Khatib would lead the wider diplomatic campaign.

Western governments will be relieved that Khatib appears to have turned a leadership crisis into an opportunity for change but remain concerned at the ability of the opposition to overcome divisions and factionalism. Another issue is the often fraught relationship between exiled political leaders and armed fighters on the ground.

Khatib defended the presence of foreign fighters in the uprising but urged those needed by their families to go home. a small concession to western concerns about the rise and proliferation of jihadi-type groups such as Jabhat al-Nusra. But he also said advisers from Iran, Russia and Lebanon’s Hezbollah – all Assad allies – should leave.

In Damascus, the government lambasted as “shameful” the Arab League’s move to allow the opposition to take the Syrian seat. The league had “exchanged its Arab identity for a Zionist-American one”, complained an editorial in the state-run Al-Thawra newspaper. Recognising the opposition “legitimises terrorist acts that are committed overtly and blatantly against the Syrians”, it said.

Syria will be concerned at the obvious parallel – the league’s recognition of the Libyan opposition to Muammar Gaddafi months before he was overthrown by Nato-backed rebels. Syrian state TV did not cover the summit meeting, broadcasting a programme on makeup for women instead.