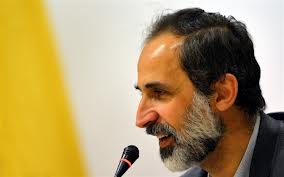 He “has taken the realm of the national coalition at a critical stage and he was able to garner great popularity and establish unity among ranks of the opposition. So he is to remain in his position for now,” Ahmed said.

No date for the meeting has been set.

Earlier, al-Khatib announced his resignation in a written statement, and accused world powers of using the Syrian crisis to advance their own interests.

“I promised the Syrian people and God to resign if matters reach some red lines,” he wrote.

He wanted to step down, he said, “so I could work with more freedom unavailable to me within the official position of the organization.”

Last week, a Syrian opposition alliance elected Ghassan Hitto — who had studied and lived in the United States — to lead the opposition’s interim government.

Hitto went to Syria on Sunday, according to a Facebook post from the Syrian National Coalition, crossing the border with Turkey and meeting with rebel leaders in Aleppo.

In a statement about the resignation, Mohammed Ali, a spokesman for al-Khatib, said, “For two years now we’ve been slaughtered. We keep hearing that we will get arms, then that we won’t get arms. Everyone is trading in the Syrian crisis for their own interest and agenda. The international community is doing nothing.”

“Everything that has happened to the Syrian people — including the destruction of their infrastructure, arrest of tens of thousands of its sons, and the forced displacement of hundreds of thousands, and other tragedies — have not been enough to cause an international decision to be taken to allow the people to defend themselves,” the statement said.

The news comes two days before members of the Arab League are scheduled to meet in Doha, Qatar. Qatar’s Foreign Minister Sheikh Hamad bin Jassim al-Thani said Sunday he is looking forward to the participation of the interim government at the meeting.

Al-Khatib apparently has wanted to leave his position for some time. He favored having an executive committee lead the group rather than one interim leader.

Before news of the group’s refusal to let al-Khatib step down now, U.S. Secretary of State John Kerry said he likes al-Khatib personally and was sad to see him go.

“The notion he might resign has been expressed on many an occasion and is not a surprise,” Kerry said.

Change within the opposition leadership is inevitable, and the United States “views this as a continuum,” he said.

“The opposition is more than one person,” Kerry said.

The Israeli military, meanwhile, said its troops came under fire Sunday in the Golan Heights from the Syrian side — and soldiers returned fire.

“We view very harshly the fire opened last night and this morning, from the direction of Syria on an IDF (Israel Defense Forces) force in Israeli territory,” Yaalon said. “We will not allow the Syrian army or any other factor to violate Israeli’s sovereignty by firing into our territory.”

IDF said no casualties or damage had been reported on the Israeli side of the border, but it was continuing to monitor the situation in the border area.

Syria’s opposition network, the Local Coordination Committees of Syria, said rebels were clashing with the Syrian army near the Golan Heights border at the time.

Fighting in the area has intensified in recent days as rebels backed by Nusra Front fighters gain territory.

The radical Islamist al-Nusra Front has emerged as one of the most effective groups in the Syrian resistance, drawing on foreign fighters with combat experience in Iraq and elsewhere.

In December, the U.S. State Department moved to blacklist the rebel group as a foreign terror organization linked to al Qaeda in Iraq.

“It turned out to be a cover,” Peres said. “He tried to build a nuclear bomb and he built a chemical arsenal. Fortunately, the nuclear installation is destroyed. Unluckily the chemical arsenal remained.”

He added, “What’s happening in Syria is a tragedy for Syria.”