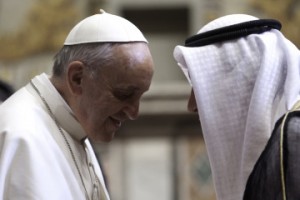 Pope Francis urged the West on Friday to intensify dialogue with Islam and appealed to the world to do more to combat poverty and protect the environment.

Speaking in Italian, the new pontiff said richer countries should fight what he called “the spiritual poverty of our times” by re-forging links with God.

“How many poor people there still are in the world! And what great suffering they have to endure!” he told the diplomats in the Vatican’s frescoed Sala Regia.

Some critics of the Catholic Church, which has been struggling with scandals and internal divisions, say its rejection of contraception in particular harms the poor.

Others say it does much good in the developing world, running thousands of hospitals, schools, orphanages and hospices.

Francis made his appeal in an address to diplomats accredited to the Vatican, sending a message through them to the leaders of the 180 states with which the Vatican has diplomatic relations.

He urged them to help keep religion central in public life and promote inter-religious dialogue as a catalyst for efforts to build peace.

“In this work (peace building), the role of religion is fundamental. It is not possible to build bridges between people while forgetting God,” he said.

“But the converse is also true: it is not possible to establish true links with God while ignoring other people. Hence it is important to intensify dialogue among the various religions, and I am thinking particularly of dialogue with Islam.”

Francis, the former Cardinal Jorge Mario Bergoglio of Argentina, said he was grateful that many Muslim religious and civilian leaders attended his inaugural Mass on Tuesday.

Dialogue, he said, “should help to build bridges connecting all people, in such a way that everyone can see in the other not an enemy, not a rival, but a brother or sister.”

He underlined the importance of defending the poor when he explained why he had decided to take the name of St. Francis of Assisi, who is associated with austerity and help for the poor.

“Fighting poverty, both material and spiritual, building peace and constructing bridges: these, as it were, are the reference points for a journey that I want to invite each of the countries here represented to take up,” he said.

In his speech, the pope thanked Christians in the developing world “who dedicate themselves to helping the sick, orphans, the homeless and all the marginalized, thus striving to make society more humane and just”.

African Catholics have said they want the new pope to champion traditional Church teachings, such as opposing contraception, abortion and same-sex marriage.

Since his election, Francis has drawn attention to the need to defend nature and included it in his speech to the diplomats.

“Here too, it helps me to think of the name of (Saint)Francis, who teaches us profound respect for the whole of creation and the protection of our environment, which all too often, instead of using for the good, we exploit greedily, to one another’s detriment,” he said.

Francis has set the tone for a humbler papacy. The Vatican said he will hold a Holy Thursday ceremony next week in the chapel of a youth prison instead of in the Vatican or a Rome basilica where it has been held before.

He has also begun inviting outsiders to attend his morning Mass, something which Pope John Paul II did but which Benedict XVI, who is now “pope emeritus”, discontinued.

On Thursday, France invited staff of the Santa Martha residence in the Vatican and on Friday it was the turn of Vatican gardeners to attend the morning Mass in the chapel of residence, a spokesman said.

On Saturday, Francis will fly to the papal summer retreat south of Rome to visit Benedict, who last month became the first pope in 600 years to abdicate instead of ruling for life, saying he no longer had the strength to carry out his mission.